"Lean In" Club Emboldens BC Women To Strive For More

Features, On Campus
by Crystal Chon

"What would you do if you weren’t afraid?" -Sheryl Sandberg

Lean In is a new club on the rise at Boston College that aims to empower women to leave behind the timidity and fear that often plague women in the workplace and embolden them to reach their full potential. The club helps BC women engage with peers and mentors, giving them an outlet to talk, listen and be heard.

Lean In as a greater national movement is based off of the New York Times Best Selling book, Lean In: Women, Work, and the Will to Lead by Sheryl Sandberg. It spurred conversation and inspired a greater push to close the gender leadership gap in the United States and counteract gender bias for women in the workplace.

Named one of the World's 100 Most Powerful Women by Forbes, Sandberg has been widely acclaimed and recognized for her business endeavors, as well as her work in the vein of feminism. She uses this business savvy and her influential position as the COO of Facebook to encourage women to lean in to navigating their own career "jungle gyms," as she calls them.

Additionally, she has sown the seeds for an ever-growing network of Lean In "circles”— communities of women across the nation that serve as support networks for each other as they pursue their career and life ambitions.

The BC branch of Lean In is organized as one big chapter, which is then broken up into smaller discussion circles, led by mostly upperclassman mentors.

Photo courtesy of Lean In at Boston College / Facebook

“The point is to form a community in which women can come together, work together, go through issues and hopefully form relationships that are long lasting," Alison Takahashi, President of Lean In and MCAS ’16, said. The goal is to "talk about issues that [the women] see on campus … whether it’s large scale, or things as small as what they’re noticing in the classroom."

Lean In provides a curriculum and guides for the moderators to reference in their circle discussions, letting members think and discuss topics such as "Seek and Speak Your Truth" and "Don’t Leave Before You Leave"—which refers to the tendency of women to scale back at work in preparation for starting a family long before they become pregnant, or are even in a relationship.

But importantly, the discussions are never bound to just these topics; they encourage members to talk about whatever is relevant to their everyday lives as BC students and college-aged women.

“You’re really valued as a person and for what you can bring and what you can get people excited about," Takahashi said. "We’re very inclusive and accessible. We kind of want it to be a group of friends."

While Lean In is often associated with other female-oriented campus organizations such as Smart Women Securities or Women in Business, the club is striving to be less focused on just business or gender equality. Instead, they hope to embrace these ideas in inclusion with the many other relatable topics or issues that their members face; their priority is in community.

“What’s different about our club is the small group discussion aspect of it," says Vice President Erin McCarthy, CSOM ’18. "I feel like there’s warmth to that, and a sense of belonging, because you belong to a circle of 10 people."

So men and women of BC—join a circle and get talking. Just as Sandberg asked the millions of readers of her book, ask yourself: What would you do if you weren’t afraid?

Lean In meetings, or circle discussions, happen once a week on Sundays at different intervals throughout the day (you can sign up for whichever time works best for you). Lean In is always open to new members; contact Alison Takahashi at takahasa@bc.edu or Erin McCarthy at mccartzc@bc.edu to get in the loop. 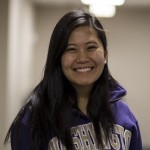 Will fight for the right for year round Christmas lights. Hopes to one day live in a world where my friends would stop complaining and just appreciate Elvis Presley with me.