Men’s hockey needed a dominant weekend of conference play to clinch its spot atop the Hockey East as the regular season comes to a close. But the back-to-back series against Vermont fell short, leaving the Eagles with two consecutive ties and an uncomfortably close lead over BU for the regular season title.

Both games saw the Catamounts playing catch-up, as Boston College (18-12-4) controlled early but failed to maintain the momentum for the full 60 minutes. Friday night’s game was especially painful to watch unravel, with the Eagles tallying a 3-goal lead in the first ten minutes and losing it as Vermont led scoring 3-0 in the last 50 minutes of the tie.

Senior Ryan Fitzgerald opened scoring about a minute and a half into the game with a shot knocked in off passes from classmate Austin Cangelosi and sophomore Michael Kim. Just two minutes later, Cangelosi notched his own with help from senior Matt Gaudreau. Halfway into the first period, freshman David Cotton’s goal looked like it stamped the Eagles’ ticket to victory. The teams headed into the locker room with BC leading 3-1 after a smooth and cohesive period. 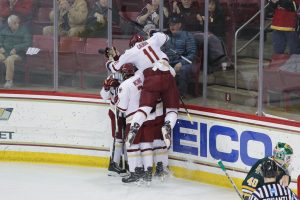 The Eagles stopped rolling there. A scoreless second period tired the skaters out, and the lethargic defense allowed two late goals from UVM to tie the game at 3-3 and send it into overtime. This kind of pressure isn’t BC’s strong point – after this weekend, they are 0-0-4 this season in overtime contests. The final five minutes of the game saw the Eagles attacking the goal more aggressively than they had all game with 6 shots in about 45 seconds, but none found the net, leaving the teams with a 3-3 draw.

“This is a gauntlet, every week in Hockey East, especially as you get into February and March,” said Jerry York after Friday’s contest. “We take the point, we sleep on it, we move on tomorrow.” 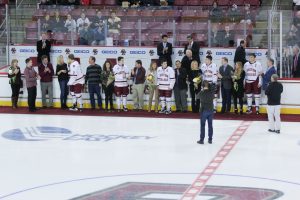 But the next day was more of the same. Saturday’s Senior Night game had UVM’s Brian Bowen matching goals from freshman Julius Mattila and Cangelosi to keep the teams locked in a 2-2 tie by the end of 65 minutes. The bright spot of the game came in the third period when the Eagles managed to convert a powerplay opportunity thanks to a beautiful connection from Gaudreau to Colin White, tipped into the goal by Cangelosi. Making the most of these man-up possessions will be integral for BC as the Eags finish out the regular season and start looking towards the HEA tournament.
While the results of the weekend were not ideal for the Eagles’ hopes to top the Hockey East, the crown is still within their reach. The Eagles remain 2 points ahead of #2 Boston University thanks to the Terriers’ tie with UNH Friday night. BC has secured a bye in the first round of the Hockey East Tournament with Friday’s tie. York and his boys look to finish the season on a high note this coming weekend with back-to-back games against UMass Lowell Thursday and Friday.