As Boston College football’s April 22 spring game draws near, it is impossible to avoid thinking of the coming games. The 2016 season saw an uninspiring cast of out-of-conference opponents that included UMass, Wagner, Buffalo, and UConn. This schedule yielded much criticism, and the athletic department made sure that let down wasn’t going to happen again. BC football’s 2017 schedule was recently ranked as the ninth toughest in the nation by CBS, but this slate is what the fans want and, more importantly, what the program needs.

For the third time in four years, BC will begin its season on the road. Instead of a 2017 edition of the Battle of the Bay State, BC will head to Northern Illinois to start the campaign. Outside of last year’s trip to Ireland to play Georgia Tech, the Eagles have begun the season playing the likes of Maine, UMASS, and Villanova—but the 2017 matchup against the Huskies is far tougher than in years past. NIU is a good MAC program, one that nearly beat BC in 2015 and had a Heisman finalist in 2013. This game will be on a Friday night, and the Eagles will be thrown right into the fire as NIU looks to get a power five win on national television to kick off the season.

Instead of the cupcake games that were Wagner and Buffalo, BC will play Central Michigan and Notre Dame next. Central Michigan is another MAC opponent that will be a tough win. The Chippewas played in a bowl game last season and beat a phenomenal Oklahoma State team along the way. However, no matter how good that matchup may be, the premier game will be the Sept. 16 matchup against Notre Dame.

The Holy War has not been played in Alumni Stadium since 2012, and if there's one rivalry game that will energize the fanbase like no other, it's this one. Since the move to the ACC, BC has struggled to find a true rival. Syracuse was branded so for a while and is again this year, but Pitt is a more natural match for the Orange. Wake Forest was the Eagles' last rivalry week opponent, but despite a good match in recent program ineptitude, there is no real animosity from the alumni, which drives rivalries. Unless UConn joins the ACC, no conference opponent will bring the true rivalry feel that comes with playing the Irish.

BC should be salivating at this opportunity. ND is coming off a heinous 4-8 season, only made worse by the fact that Quarterback Deshaun Keiser has left to likely be a first round NFL draft pick. The Irish are down, and enter the season with uncertainty. On either side of BC, Brian Kelly’s group will have to play Georgia and at Michigan State. Scheduling and the cyclical nature of college football have given BC a gift: the perfect opportunity to upset the school's biggest rival and jump start a program that seems to have lost the enthusiasm it once had. 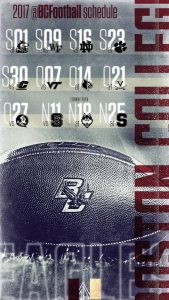 The Eagles final out-of-conference matchup is another treat for fans as they take on UConn in Fenway Park. The novelty of this game, and the fact that is essentially another "home" game, is a perfect way to create hype around a non-power five matchup.

The ACC slate is always tough, and this season will be no different. BC will host Florida State for the annual Friday night home game in late October. FSU should be in top shape due to the leadership of returning starting QB Deondre Francois, who has the Seminoles ranked as the top ACC team on most preseason polls, and as high as fifth nationally.

Two ACC road tests that everyone should be watching are Clemson and Syracuse, with one at the beginning of the season on Sept. 23 and the latter in the last regular season game on Nov. 25. Clemson will provide a unique opportunity to beat the defending national champions while the Tigers rebuild in a search of a new signal caller. As far as Syracuse goes, the Orange were not BC’s rivalry week opponent last season, but the matchup returns after last year’s mid-season game resulted in a close contest.

A 6-6 or 7-5 regular season with one or two wins is what this program needs. Alumni, and maybe more importantly recruits, won’t be excited about a program playing a schedule full of fluff matchups. But that issue is nonexistent come this fall. Nearly every week, BC will have an opportunity to restore the energy that once surrounded this program. They just need to win.