Features, On Campus
by Shae Heitz

The Winston Center for Leadership and Ethics, under the Carroll School of Management, has made it their mission to offer Boston College students developmental and leadership opportunities for personal and ethical formation in order to prepare students for leadership in a global society.

In efforts to promote leadership and ethics to students and the greater BC community, the Winston Center has begun to bring in numerous speakers from around the globe to present for the Spring 2017 Chambers Lecture Series.

On Feb. 23, the Winston Center presented Dr. Bennet Omalu, a forensic pathologist, neuropathologist, and chronic traumatic encephalopathy (CTE) expert. Dr. Omalu has eight degrees, over 50 published medical findings, two meetings with Congress, several recognitions from the World Health Organization, and he is also a member of the National Honor Society of neuroscience. In addition, his work on concussions in the NFL and his discovery of CTE was brought to Hollywood in the movie Concussion, where his character was played by actor Will Smith. During his presentation, Dr. Omalu stated that the movie was an accurate portrayal of both the victories and the challenges he has experienced in his career. 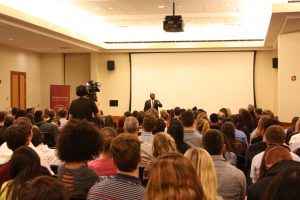 His presentation, however, was not mainly focused on the movie, but rather on his journey and “[seeking] the truth of humanity” through his faith.

Dr. Omalu’s story begins in Nigeria during the civil war where he and the rest of his family were refugees. After experiencing the psychological traumas of war, he felt isolated and depressed. During this difficult time in his life, however, he explained to the crowd that he discovered the “immense power of education and knowledge.” This passion for knowledge and education paid off—at the age of 15, Omalu was accepted to medical school, and at 21, he became a physician.

“Originally I had not wanted to go to medical school,” Dr. Omalu began, “My dream was to be a pilot and fly from San Francisco to Australia.”

After a two-month break from medical school, Dr. Omalu recalls a time when he truly found himself, and he explained that the best thing he could do for society was to just be himself. “No matter what your name is, you are the only one of you in this history of mankind,” he said.

In 1994, with $250 in his pocket, Dr. Omalu traveled to Seattle in hopes of a better life in America, as he believed that “heaven was here [in Seattle] and America was under heaven.” However, after living in the United States for only a few short weeks, he began experiencing racism that he had never previously experienced in Nigeria.

The turning point for Dr. Omalu was a dreary Saturday morning, when he turned on the television to hear the news about a young NFL player, Mike Webster, who had died due to repeated trauma injuries from playing football. It was then that he knew he had to make a difference.

After much time and research, Dr. Omalu discovered more about concussions and CTE than any other doctor in the field. To his surprise, immediately after his findings, he was heavily criticized not only by the NFL, but by his fellow doctors as well. Even with all the doubt from his peers, he continued to believe that as long as “there are men and women, there will be truth.”

Dr. Omulu ultimately posited that children under the age of 18 should not participate in high-impact sports, such as American football, boxing, and hockey. Even though this conclusion made by Dr. Omalu is still criticized by many, he stands strongly by the fact that “the truth cannot be escaped.”

While telling the audience the story of his life and his discovery of CTE, he continuously referred back to the humanity of mankind, as well as the power of faith.

“The passion that he portrayed was unlike any other,” says Nick Bomleny, MCAS ‘20, “He was very inspiring and informative.”

All of Dr. Omalu’s medical findings made for an interesting lecture, but what was more profound was his humbleness and dedication to humanity, which is clearly what he wanted to instill in the entire audience.

“The spirit that lives in me, lives in you and lives in all of us,” he said.

Couldn't go to school down south because I love the snow too much. I have so many plants in my dorm I'm basically living in a garden. And if you spot me on campus I'm probably in an oversized sweatshirt.