The Gavel's Ryan Fennell serves up his March Madness Selections for this year's tournament divided up by region. Tune in. 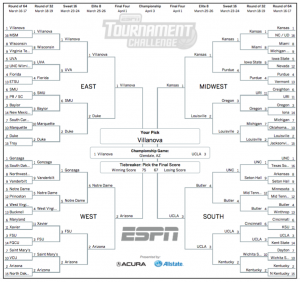 Villanova, as the No. 1 overall seed and defending national champion, might seem to have an easy path back to the Final Four. Yet further analysis reveals this year’s East region will not provide an easy road for another tournament run for the Wildcats. Wisconsin won’t be a breeze-by opponent in the Round of 32, and either No. 5 UVA or No. 4 Florida could pose legitimate threats to Coach Jay Wright’s squad. In particular, Virginia’s stingy first-ranked defense should wreak havoc on opponents and set up an entertaining chess match against Villanova. Not to mention that, on a high after cruising through most of the ACC tournament, the Duke Blue Devils remain the greatest obstacle. But experience and team chemistry are on the Wildcats’ side. With a trio of playmakers in Josh Hart, Kris Jenkins, and Jalen Brunson, ‘Nova has the experience and team chemistry to repeat last year’s tournament magic. Expect them to continue their dominance and bolster Villanova’s newfound post-season ascendance.

According to FiveThirtyEight, the Gonzaga Bulldogs enter the NCAA Tournament as a No. 1 seed for just the second time in two decades. This Gonzaga team features a balanced starting five with an effective inside-outside offensive game plan. In their 19th consecutive tournament, the Bulldogs often fizzle out early, as when Cinderella-story Wichita State upset them in 2013. Despite Gonzaga’s regular season dominance, Notre Dame will end their Final Four chances. After putting up a valiant effort to Duke in the ACC Championship game, the Fighting Irish will look to claim a third straight trip to the Elite Eight. Many have 12th seeded Princeton with a first round upset over Notre Dame, but Ivy League play is incomparable to the ACC’s elite company. However, Pac-12 champion Arizona has more notable advantages including Pac-12 coach of the year, Sean Miller. With Finland-born forward Lauri Markkanen, the Wildcats have a 7-footer who can dominate the post and shoot from the perimeter in Dirk Nowitzki-like fashion. Allonzo Trier, averaging 17.3 points per game, provides an equally dangerous threat from the backcourt. Fresh off the Pac-12 Tournament success, the ever-fiery Sean Miller will be eager for his first Final Four appearance in their backyard—Glendale, Arizona.

The East and West are difficult to forecast, but the Midwest Region might pose even trickier matchup puzzles. Despite posting an impressive Big Ten championship, Michigan was handed a No. 7 seed. As one of the hottest teams in the country, the Wolverines could be poised to outplay their ranking. Conversely, two of the higher-ranked teams in Oregon and Creighton both lost significant playmakers late in the season, which could prove the seeding superfluous.Will either team overcome untimely injuries to make an improbable tournament run? Maybe, but regardless, the Kansas Jayhawks should make it past this group to the Final Four. Senior guard Frank Mason III, who averages 20 points per game and nearly 50% from three, might just be the best player in the country. Add Josh Jackson and Devonte Graham to the mix, and you can see why Coach Bill Self’s team boasts the best group of guards in the country. When it comes to NCAA Tournament success, Kansas has history on its side. This year shouldn’t be any different for the Jayhawks.

Every year NCAA basketball analysts search for the inevitable 12-5 seed upset. After all, only four times since 1985 has at least one No. 12 seed failed to defeat a 5-seed. Princeton shouldn’t upset Notre Dame, but look out for Middle Tennessee State over Minnesota. The Wichita State Shockers, having won at least one game for the past four tournaments, should upset Dayton and even play Kentucky close. Moving on from possible Cinderella stories, the South retains serious powerhouses. While the East may boast the defending tournament champs, the South region retains three of the more formidable teams and decorated programs in college basketball. North Carolina, Kentucky, and UCLA are the South’s top three seeds, ensuring must-see basketball for this region. UNC earned its No. 1 seed, but a loss to Duke in the ACC tournament raises cause for concern. Leading the country in scoring with 90.4 points-per-game, UCLA has the weapons to run the floor and push the box score to triple digits. Freshman phenom Lonzo Ball leads the nation in assists, but will surely look to prove his scoring potential to boost his NBA draft stock. With TJ Leaf and Bryce Alford leading the Bruins, first-team in scoring and guard Aaron Holiday provides legitimate relief off the bench. With two losses to Arizona, UCLA has weaknesses in the post. But the Bruin’s high-powered offense should carry them to the Final Four.