Appa in a Disaster-Torn New Orleans

Those who are lucky enough to have experienced the Crescent City—the beautiful and soulful New Orleans, Louisiana—know that it is a truly special place. In a part of the world beating with cajun blood, the sticky southern heat hangs heavy in the air and words are drawn out a little longer than usual. Filled with snoballs and po’boys and soul food aplenty, it’s a city that boasts a sense of vibrance and welcoming unlike any other. But all of that was thrown for a loop by Hurricane Katrina.

The Category 5 mega-storm completely ravaged the Gulf Coast in August 2005, hitting particularly hard in coastal Mississippi towns and in the below-sea-level city of New Orleans after the levees broke. As one of the deadliest natural disasters in the history of the US, Katrina destroyed all she touched—but in Katrina’s wake, some of the greatest stories of hope and resilience grew up from the debris of this incredibly strong, deep-rooted New Orleanian culture, bringing communities together to rebuild their homes and lives.

This year, for the very first time, Boston College’s Appalachia Volunteers flew two groups down to learn and serve in New Orleans—where, this February, only weeks prior to their spring break trips, seven tornadoes tore through the eastern part of the city. 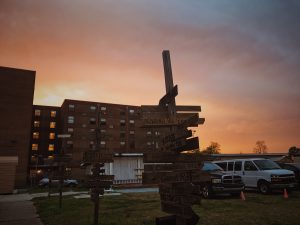 “We were in New Orleans East, where the majority of the tornadoes hit, so we were kind of expecting to see it coming in,” says Trip Leader Kaitlyn Corazzata, MCAS ‘19. “Our site coordinator told us they hit less than a mile away from where we were staying, but it was such a harsh reality actually seeing it. When we first drove in, we were having fun and jamming in the car, and then we just saw all of this destruction. And it’s crazy that it was so close to where we were staying. We had the trip planned before the tornadoes hit.”

The program, fondly referred to by its participants as Appa, is a year-long service and social justice program culminating in a spring break service trip. “While the trip is the majority of the work we do, that’s not it,” explains Trip Leader Alex Nunan, LSOE ‘17, who helped to lead the other New Orleans trip working with Habitat for Humanity. “We do post-trip experiences so that what we do is not just left in that community but it’s left with us, and we can change our outlook going forward.” While the groups recognize that their immediate impact is only a small amount of work over the span of a few days, they emphasize that the most important part of what they do is continue these conversations and reflections once they return to campus.

Nunan and her co-lead, Luke Smith, MCAS ‘19, flew down to New Orleans with their group where they visited nonprofits and shelters in the area and worked most of their days on a Habitat for Humanity site. While their meals with locals were among their more memorable moments, Smith recalls a powerful conversation with a woman at their Habitat site.

“We worked mostly with siding a house for a woman who was basically trying to keep her house alive [since the damage from Hurricane Katrina],” Smith says. “After Katrina, when a lot of houses had damage, they had a problem with people saying they were professional contractors, when in reality they weren’t, saying ‘Oh yeah, I can fix your walls and your siding,’ and next thing you know she has rotting walls with termites and all of that.”

As unfortunate as this one woman’s story is, however, she is not alone. Nunan recalls that one of their construction leaders for the week told them that somewhere around 70% of Katrina victims were also victims of some kind of contractor fraud. Much of the effects of this contractor fraud still linger heavily in New Orleans’ more impoverished communities, particularly in historically black neighborhoods like the Lower Ninth Ward. These communities stand in stark contrast to areas like the French Quarter, where money is pumped in for the sake of tourism.

“There was also a definite distinction between the church we stayed at in Kenner and [where our Habitat site was],” says Nunan. “You go from pretty, nice roads and ‘typical’ neighborhoods, to crossing the canal over to the Lower Ninth where every street is cracked and there are homeless people on nearly every corner. It’s almost like you cross over into a new world.”

However, the groups’ biggest takeaways weren’t just these stories of poverty and destruction. They, like anyone who visits New Orleans, were intrigued by the certain, indescribable soul of the city, where everyone feels like a neighbor and there’s an unbreakable strength to the New Orleanian identity.

“One thing I noticed again and again and again was people thanking us for being there, even people who weren’t direct recipients of our help there,” adds Smith. “The director of the church we were staying at thanked us a bunch of times, saying it really meant a lot to her [that we were there]. I thought that was interesting because she considered herself part of the city of New Orleans, and even though she wasn’t a direct recipient of it, our work was helping the city.”

Corazzata and her co-lead, Jack Blanchard, MCAS ‘18, had a bit of a different experience on their Appa trip. Instead of working with Habitat, their group had different projects through a church community called Camp Restore. They worked on a ranch for therapy horses, at different food pantries and soup kitchens, and in a community garden, among other projects.

“When we were working with the different food pantries, we interacted with different community members as they ‘shopped’ for their food,” says Blanchard. “One pantry also had a kitchen where they prepared over 500 hot meals for the community every day. And, since the recent tornadoes, they’ve been making hundreds more than usual each day. So we actually helped them a lot with that.”

In their reflections, the group spent a good bit of time discussing the problems that are unique to New Orleans as opposed to the impoverished areas visited on other Appa trips. “A lot of other trips can be looked at through a lens of poverty that can be changed purely by social justice and economic factors,” says Corazzata. “But a lot of the destruction and issues that we encountered were completely controlled by nature. All of the work you do can be completely shattered by a natural disaster. But there [we found] communities of hope and resilience, and learned the importance of caring for neighbors and being empathetic to each other’s situations.”

These group reflections are a vital dimension of Appa, whether or not they have outright religious or spiritual ties. Though the group is sponsored by Campus Ministry, it’s rather this Jesuit spirit of reflection and service that brings the program to life and creates an inclusive Appa community, no matter where participants are in their journeys of faith or purpose.

“A general spirituality, with religion encompassed in that, is a decent part of Appa and the conversations that are had,” Smith explains. “In a more concrete sense, really just the soul of our work is asking why we do what we do and why things are the way that they are—that’s a part of it more than anything else.”

Especially within the context of a ‘Bible Belt’ New Orleans, faith plays a huge role both in the sense of community within the city and in regard to post-disaster hope and recovery. Each of the Trip Leaders recalls conversations and remarks from locals about the grace and love of God and the blessings they had received, even amongst such widespread poverty and destruction.

“I’m not somebody who practiced any religion growing up, so my first year I was really nervous that it would be something that would get in the way of my experience,” Blanchard admits. “But they encourage us not to focus on the religious part itself but rather the profound human connections, how we all connect to one another, and the aspect of serving other communities.”

Ask any Trip Leader, and they will likely tell you that this sense of community formed from these shared Appa experiences is one of the main reasons they keep coming back and giving up their spring break trips year after year. In the world of Appa, it’s referred to as the concept of dual community. Corazzata explains it as how “the group gets close and vulnerable with each other and can their share experiences together, but also forms those connections with the people [they] meet throughout the week.”

Nunan, whose trip to New Orleans was the sixth and final one of her Appa trips, tells me how difficult it is to even try and compare one trip to the next. “Every place you go is so different and has such a different feel to it,” she says. “And it’s so cool to get to go and have that experience with a group of people from BC that nobody else has, and get to bring that back to campus and push ourselves to ask these hard questions. It’s so easy to get caught up in that BC bubble and not really think outside of BC, so these communities have really given me a lot of perspective in my everyday life.”

Each of the Trip Leaders I talk to tells me a different version of this same story: the soul and essence of Appa is indescribable in its own right—with their recent trip made even more so by the unique New Orleanian backdrop of heart and soul and community.

“The conversations you have when you come back really just make you more in-tune and intentional and aware of the impact you have on other people,” says Blanchard. “On every trip, there’s a maximum of fourteen people who have had this experience together, and then everyone has their own individual experience. And when you come back to campus you’re accountable for how you share that experience with the BC community.”

With the program having expanded this year to its highest-ever number of 36 spring break service trips, Appa certainly won’t be going anywhere any time soon. And the experiences that live on through its participants only serve to further energize the campus community, both enriching the lives of those who served and those who help to continue the conversation.

“We talked a lot in our reflections about the tangible work that we did—we are all college kids with no construction experience, which can be hard to reconcile when there are construction workers who could have done the same work in a shorter amount of time,” says Nunan. “Maybe anybody could have gone and done that work—but we were present, and we can carry that conversation and those experiences on with us into the future.”