Home›Features›Hack the Heights Paves Way for BC Tech Community

Hack the Heights Paves Way for BC Tech Community

On campuses like Harvard and MIT, which are known for the strength of their computer science departments, a culture of innovation and what is known as “hack culture” thrives. At Boston College, the Computer Science Society (BCCSS) is taking the reigns on the movement and fostering a similar culture on the Heights. They wasted no time in doing so, and recently debuted their “Hack the Heights” event, BC’s first ever hackathon.

“In this context, hacking isn’t meant in the nefarious sense, but rather finding clever solutions to simple problems,” says BCCSS member John Abreu, MCAS ‘20. “It’s like life hacks. People come out of [hackathons] creating something new.”

Hack the Heights, a 24-hour hacking and innovation marathon, kicked off at 6 p.m. on Friday, April 21 and concluded with an awards ceremony at 8 p.m. on Saturday, April 22. The event took place in various rooms throughout Carney Hall, and featured corporate sponsors, tech talks, and prizes for beginners and seasoned hackers alike.

The event brought light to a rising demand from students and faculty alike—the need for more physical space on campus, namely in the form of a student center. While the Computer Science Society has held smaller project nights in the computer science labs on campus, members of this community are among those who recognize the necessity of a physical space on campus for innovation, research, and tech movements.

“BC lacks that collective space where you can make your crazy ideas a reality like this,” says BCCSS member James LeDoux, MCAS ‘17. “The spaces in Carney and the computer science lab in Fulton act as microcosms of this, but having a larger space would be a huge deal for these types of communities on campus.”

Still, Hack the Heights made do with the resources available to them and proved to be a major success, as well as a major leap for computer science at the University. “Hackers” joined together in teams to create and develop projects throughout the duration of the hackathon, with the end goal being a finished, tangible product. Hackers also had the option to attend different workshops along the way, ranging from app development to rapid prototyping demos. 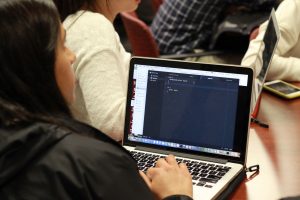 However, the event planning process wasn’t complete without significant hurdles from the administration. While they were on board with the general vision of the event, Abreu notes that “getting the administration to accept the fact that we weren’t getting together to tear down UIS” was a major obstacle in the team’s way. Still, the event far surpassed expectations, bringing in students of all hacking ability levels to find creative solutions under a rigid time restraint.

“As long as I’ve been here, I’ve noticed that tech at BC is very much grassroots,” says Abreu. “There isn’t really a centralized place for people interested in creating things to go and build…there are so many little pockets of it. You have Joycestick and the Eagle Eats app guy, for example.”

It’s events like on-campus hackathons that are moving in this very direction—towards a campus culture that is more eager to embrace ‘hacking,’ tech, and innovation. The Computer Science Society has taken major strides to ensure that this niche culture is given the space and resources to thrive.

Concluding with a final awards ceremony, Hack the Heights gave its first prize award to the team behind “Emotus,” a mobile app aimed at providing a solution to social skill education for children with autism. The second prize went to the “Don’t Skip Class” team, whose mobile app was designed to fill the gaps of UIS and provide a more user-friendly schedule for students, with features including lunch recommendations and the ability to send emails to professors. 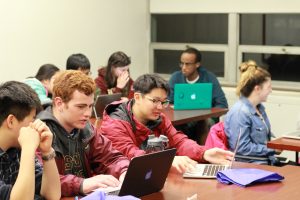 Event sponsor GE awarded a prize, as well—Best Hack for the Social Good—which went to the team that created “WeFill,” a mobile app with a mapping utility so that students can pin and locate reusable water bottle filling stations around campus. GoPuff, another event sponsor, gave vouchers to the winners of the beginner’s prize, a team who created a mobile app game called “Feel the Bern.”

The hackathon itself was successful, but it also showed an even more important positive shift in the development of BC’s tech culture. Moving forward, it’s students like these whose work and efforts contribute to breaking BC out into the evolving University computer science scene.

"It's such a unique culture and unique type of event," says LeDoux. "There's no experience required, and you're guaranteed to learn something new."