Students Advocate for Greater Access for Students with Disabilities

BC News, News
by Maura Donnelly

Students are calling for greater campus awareness and support to make Boston College a safer and more accessible campus for people with disabilities.

While there are support systems in place on campus, students with disabilities nevertheless face physical and social barriers that influence their ability to thrive at BC.

Eliza Manriquez, MCAS ‘20, needs a service dog for issues impacting mobility and says that there is a lack of awareness about how to respond to the presence of a service dog on campus.

“Everywhere I go, people turn around and stare; people take pictures and videos of me,” said Manriquez. “A lot of times people come up to me and start petting without looking at her vest. It is important for people to remember that she is not just a pet; she has a job that is important.”

Although this has happened to Manriquez before, she has received a more negative response to her use of a service dog than she did in high school. She attributes this to the fact that her school had informed all students about the presence of a service dog on campus and encouraged discussion about proper behavior around service dogs.

Manriquez suggested students would benefit from diversity programming at orientation that raises awareness about the needs of people with different types of disabilities, as well as issues related to race and sexual orientation.

“There are a lot of invisible disabilities, even physical ones,” said Manriquez. “I think that it is important to be aware that not everyone is comfortable sharing their disability or what they have accommodations for.”

According to Council for Students with Disabilities (CSD) Chair Mary Royer, LSOE ‘17, the major policy initiative CSD has worked on this year is making the Eagle Escort service run by BPCD more accessible to students with physical disabilities or injuries.

Currently, there are two Eagle Escort vans, one of which is wheelchair accessible. At a given time, only one van is guaranteed to be available to the 9,000 undergraduate students.

“As such, Eagle Escort is oftentimes very late to pick up students, or does not show up at all,” said Royer. “Particularly for students with disabilities who rely on the van, this can be very isolating and result in lowered grades if they cannot get to class.”

CSD passed a unanimous resolution through the Student Assembly of UGBC on March 19 that asks the university administration “to take the necessary steps to ensure efficient and quality transportational services to all students on campus regardless of their physical ability, and recommits UGBC to working with the administration and the Boston College Police Department in the implementation of policies to reform Eagle Escort,” said Royer.

Also, CSD created an accommodations form that allows students to request any accommodations they need for UGBC events and hosted the first annual Ability Awareness Week this year.

A major concern brought to the CSD’s attention recently was non-tactile braille signage outside a wheelchair accessible bathroom in Bapst Library. Non-tactile braille has the characters of braille, but they are not raised, so students with visual impairments can’t read them.

Manriquez first noticed the non-tactile characters on the sign outside the bathroom on April 3 and brought up the subject to Leslie Templeton, MCAS ‘19, who advocates for the rights of students with disabilities on campus and will be working as an intern this summer in the department of Education Policy and Practice at National Education Association’s Center for Great Public Schools.

Under the Americans with Disabilities Act (ADA), signs for permanent spaces including classrooms, exits, and stairs must meet visual and tactile criteria for both raised and braille characters.

Templeton notified the university through the Boston College Facebook page on April 13, expressing concern that the university had violated protections for the visually impaired that are guaranteed by ADA.

If tactile braille signage is not available, it is more difficult for individuals with visual impairments to move around campus buildings. This puts them at additional risk in the case of an emergency,  when they would need to safely evacuate a building.

The Boston College Facebook moderator sent a message to Templeton on April 19 to say that the sign was temporary while the university updated accessibility signage at Bapst. The process was expedited so that the temporary sign was replaced with a permanent, tactile sign within a few days.

ADA allows temporary signs to be used for up to seven days. The university did violate this law, since Manriquez noticed the sign more than seven days before it was reported and addressed.

Although this new sign now meets the requirements, the building still does not meet ADA requirements because so few of permanent rooms and spaces are marked with proper signage, according to Templeton.

Also, in Gasson Hall, the signs outside the stairwells meet tactile requirements, however the signs indicating floor level inside the stairway do not include braille characters.

While the majority of signs in O’Neill Library meet guidelines, there are some staff areas, the Connors Family Learning Center, and an emergency exit on the second floor that are not marked properly with braille characters.

“As Chair, something like this is of utmost importance to me,” said Royer. “However, based on my meetings with various faculty members over the course of this year, I do believe that the university is taking steps to make the campus more structurally accessible, although there is certainly great room for improvement.”

Another issue Royer acknowledged is that students are often confused about which office to register for accommodations with, especially if they have more than one type of disability.

At BC, there are three offices that provide different services to students with disabilities: Disability Services, the Connor’s Family Learning Center (CFLC), and the Learning Resources for Student Athletes.

Disabilities Services serves students with medical, physical, psychological, or temporary disabilities, while the CFLC works with students who have learning disabilities and ADHD. If students have more than one type of disability, they should meet with the CFLC to determine which office’s services are more helpful to them.

Templeton said accommodations such as having note-takers or extra time to take tests allow students with learning disabilities and ADHD to perform at the same level as able-bodied peers.

“I think that the biggest issue is that when you have a learning disability, you can feel alienated,” said Templeton, who described how having dyslexia and ADHD negatively impacted both her academic performance and self-esteem from a young age.

According to Templeton, students with disabilities often must advocate for the accommodations that help them to even the playing field. However, many professors do not understand the impact of having a disability and students are often unaware of laws that protect people with disabilities.

Templeton acknowledged that while the accommodations needed will be different for each student, she believes that all would benefit if professors were educated about different types of disabilities and students participated in self-advocacy workshops that teach students their legal rights and how to talk with professors.

“The more informed teachers are on disabilities, the better the outcome for students,” said Templeton. “Professors need to be counseled on how to deal with a student with disabilities. We need to think about how we approach and talk to students with disabilities, so they don’t feel alienated.”

“Overall, there should be a mandatory disability orientation for all students who sign up with either Connors Family Learning Center or the Disabilities Services Office, so students know their rights, how to get in contact with their ADA coordinator, and places on campus for support.” 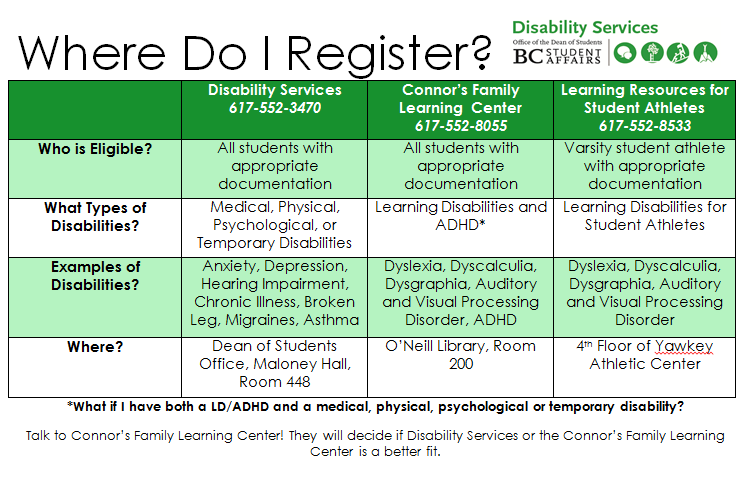