Home›Sports›BC Eagles›Women's Club Hockey: From Startup to Organization of the Year

Women's Club Hockey: From Startup to Organization of the Year

BC Eagles, Sports
by Emma Thornton

New England is the epicenter of ice hockey. With both its men’s and women’s varsity ice hockey teams ranking atop the U.S. Hockey polls year after year, Boston College is no different.

So, it's shocking to find out that women’s club ice hockey did not exist on the Heights a mere four years ago.

“Growing up, I came to the Heights looking for an opportunity to play ice hockey and get involved. I was always so passionate about hockey. I came in my freshman year and I met with a group of girls who all displayed a similar interest,” said senior Jenny O’Donnell, who has been with the team since before the start up.

O’Donnell and a group of three other players that she had known from high school were determined to make women’s ice hockey a club sport during the 2013-14 school year.

But in the meantime, they wanted to play right away. So, the girls got together other hungry players and dubbed themselves “Chestnut Hill”—they weren’t allowed to call themselves BC—while waiting out the application process.

After many presentations, meetings, and the creation of a constitution and mission statement, Women’s Club Ice Hockey was recognized by the university in the summer of 2014.

Today, you wouldn’t recognize the team that scrapped together a dozen girls, dressed in improvised warmups as uniforms, and played as Chestnut Hill while waiting to be recognized as a club sport. 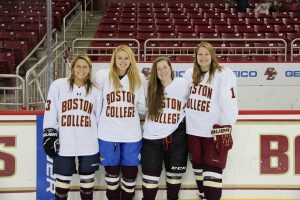 In just three years, the team has won the Independent Women’s Club Hockey League (IWCHL), going 18-1, and made it to Nationals. Most recently, the club has been recognized as the Student Organization of the Year by the Office of Student Involvement. The award is given to the organization that best exemplifies its stated mission and enriches student life through programmatic efforts.

And somehow, the team has never had to make cuts. “People kind of cut themselves and understood where they were during our tryouts,” said O’Donnell, whose dad, Bill “Coach O” O’Donnell, coaches the team of 24 alongside another player’s dad, Dave Phalen, the father of Catherine Phalen.

Coach O and Coach Phalen run the practices and determine the lines for games, but the scheduling, budgeting, organizing, etc. is all on captains Lauren Wedell, and the younger Phalen.

During the regular season—which lasts from September to March—the team practices twice a week and spends most Sundays on the road traveling to different locations around the Northeast for games.

The first two years the team played strictly in the IWCHL, a league consisting of eight schools in New England. The club joined a second league this year, however, called the American Collegiate Hockey Association (ACHA) in order to have a shot at making Nationals.

Despite the addition of nine incoming freshmen and even one senior, Rose Rather, this past fall, the squad immediately connected on the ice.

“No matter what position people were in, they knew where they were. We communicated a lot on the ice and definitely just meshed well, all the lines. We were just a very well-adjusted team, everyone knew each other’s strengths,” Rather commented.

2016-17 was the first year the team came in first in the IWCHL. A trip to Columbus, Ohio for Nationals in March was a plus.

“I don’t think we came into this season thinking we would ever get to go to Nationals, just because we had never been and we didn’t know where our season was going to end up. But by the second ranking (of the ACHA), it was pretty clear that we would be able to go,” said Wedell.

The ACHA takes the top six teams from each region (the East and West) to Nationals every year. Out of the 22 teams in the East Conference, BC rolled into Nationals in 2nd place this past March.

As compared to the previous season(s), the fall 2016 season demonstrated that this year brought a different tide.

“Last year, there was about an equal chance every game that we could lose it or win it, whereas this year was different. We kind of knew that we had the capability and the talent to win every game that we were in,” remarked Wedell.

The team’s 9-0 shutout in the first game of the season up at Union College in New York was a bit of an indicator.

“We were a heavy offensive team—our defense had almost as many goals as our offense. When we got down in the offensive zone we were pretty hard to stop,” added Rather.

In the IWCHL league final, BC blew out University of New Hampshire, 5-0. It wasn’t even close.

“It was crazy to think about the year before when we would go into a game and think maybe we’ll win, maybe we won’t. To come in and win a championship for the IWCHL, and by a substantial deficit really speaks to the quality of our team and everything really aligned this year,” emphasized Wedell.

While the journey to Nationals took a different turn—the Eagles lost in the first round to the University of Minnesota Duluth, and then tied North Dakota State University in an elimination game—nothing could discredit the development this team has made in the last few years to get to this point.

“People are aware of what their roles are going to be. And everyone bought into those roles this year, everyone knew what we needed when we needed it and people are willing to sacrifice their playing time or getting a goal versus an assist for the overall team goal: to make it to Nationals and have a really successful season.”

And, to close off the school year, the team was honored as the 2017 Organization of the Year for Club Sports, and Wedell earned the Honor of Eagle of the Year—awarded to male and female graduating athletes who are outstanding athletes, leaders, scholars, and citizens, and who truly embody what it means to be an Eagle on and off the field (or in this case, ice).

BC Women's Club Ice Hockey would like to thank Emily Charnowski for her continual support and encouragement. Additionally, we would like to thank Coach O and Coach Phalen for their dedication to the team and their thoughtful advice, both on and off the ice. We would not have had a successful season without Jake Evans, and are incredibly grateful for his sacrifices to spend Sundays at the rink. A final thank-you must be extended to all of our parents, fans, and donors.