In the wake of the Manchester terror attacks on May 22, during which 22 Mancunians were killed and over 100 were injured, a symbol from the city’s industrial past has become more important than ever. 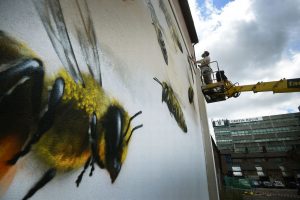 While artists across the world showed support to victims and their families in a variety of ways (most notably in the “One Love Manchester” concert, headlined by Ariana Grande), local artists have been paying tribute to the victims with a focus on the identity of the city.

On a wall in the Northern Quarter of Manchester, right next to the Koffee Pot Bar and Café, a new mural has emerged. Twenty-two worker bees appear on the wall, representing the twenty-two deceased in the recent terror attack. MCR (short for Manchester) is painted in the middle of the bees with a heart around it. 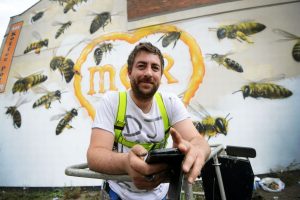 So why paint the town with this bug? The worker bee motif began in the 1800s during the Industrial Revolution. Manchester was a city filled with hard-working citizens, and the old textile mills were often referred to as hives. Thus, the bee is a symbol of the solidarity and fortitude of the recently victimized city.

Art prevails and terror ceases to thwart the efforts of peace and love that the city of Manchester holds above its fear.

The worker bee represents more than just the nine-to-five work days of the Mancunians. It is a piece of their past, a proud artifact of their identity, that the terror attack never had a chance of taking away.