BC entered Alumni Stadium off a gritty 23-20,road win at NIU and was looking for its fifth-straight win.

And, with a brutal upcoming schedule that includes Notre Dame, Clemson, Florida State, Louisville, and Virginia Tech, the Eagles needed one guaranteed in-conference win to help secure a bowl game—the same type of win that came from Wake Forest last year in the final game of the regular season. 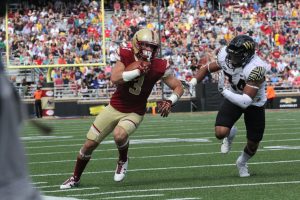 But BC ended its chances before any could truly develop.

The first quarter began slow, with each team forcing the other to punt for six consecutive plays. A shift in action occurred when Jon Hilliman fumbled on the second play of BC’s fourth possession, setting up Wake Forest (2-0, 1-0 ACC) at BC’s 26-yard line late in the first. Just two plays later, Wake’s senior quarterback John Wolford found Greg Dortch for a nine-yard touchdown pass with 1:28 left in the second.

Hilliman’s fumble would be the first of four turnovers BC (1-1, 0-1 ACC) would allow throughout the game—two of which resulted in touchdowns.

“Statistically, we were pretty close—pretty even in numbers. But, you can’t turn the ball over. And we turned the ball over,” said BC head coach Steve Addazio.

Within the third drive of the second quarter, Wolford finalized a 64-yard drive with his own 29-yard touchdown run, boosting the Demon Deacons to 14-0 with 10:20 remaining. Wolford—whose older brother, Bobby, played fullback for the Eagles—ran for 112 yards total and went 11 of 17 for 113 passing yards. 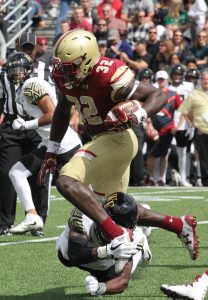 After Wolford’s run, however, Anthony Brown, in his second-ever career start, appeared to find a bit of a stride for the Eagles. Brown used short, efficient passes in a sequence which penetrated the Wake Forest line deep in enemy territory. The redshirt freshman connected with Jeff Smith on a dart across the middle for first and goal; then, Brown chucked a pass off a bootleg to Hilliman, who charged into the end zone for a six-yard touchdown. Hilliman’s first career touchdown finally put the Eagles on the board, 14-7, with just 3:13 in the half.

But a minute and a half later, a Brown pass intended for Kobay White slipped through the redshirt freshman’s hands and resulted in a 30-yard pick-six by Wake, relaunching the Deacons' lead 21-7 before halftime.

“We just have to go. I have to get better,” said Brown—who went 11 of 29 for 119 yards—on his three total interceptions.

The two teams exchanged field goals to open the second half, yet another Brown pass was intercepted with under six minutes left in the third. This crucial turnover resulted in a touchdown drive for the Deacons, and they ultimately pulled out of reach, 34-10.

“I still have confidence in myself," Brown said. “I just have to put my teammates in a better position to win.”

Addazio determined Brown the starter just before last week’s win at Northern Illinois. But after Brown’s third interception late in the third, he was subbed for veteran, redshirt junior Darius Wade.

BC defense held Wake Forest to merely a field goal in the fourth, extending their lead 34-10, but it appeared the Eagles determined their own fate much earlier. 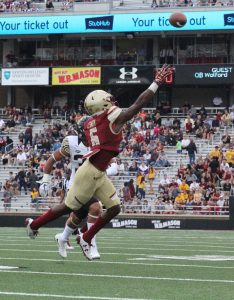 “There’s only value in one thing: We’ve got a lot of bright-eyed football team down there. They [want to] go. They just want to come in this afternoon and watch the tape and get going…..They can see the upside, and they’re in a race to get there as fast as possible,” said Addazio.

BC will need to pick up the pace as the Eagles face-off No.24, Notre Dame, next Saturday at home.