With Harold Landry noticeably absent from the field, defensemen Zach Allen and Lukas Denis picked up the slack and came up with several key tackles to stave off Notre Dame’s momentum in the first half before the Irish found their offensive footing.

Coming off of a disappointing loss to Wake Forest at home, the Eagles attacked the game at an unusually high tempo, leading twice in the first half at 3-0 and 10-7, their final lead of the game. Unfortunately, it was a tale of two halves, as the offensive pressure let up and the Eagles reverted back to their all-too-familiar run, run, pass, punt habit.

“This is like the tale of two stories to me,” said head coach Steve Addazio. “Anthony Brown was playing great, Jon Hilliman had the best game of his life out there. We're just developing.” 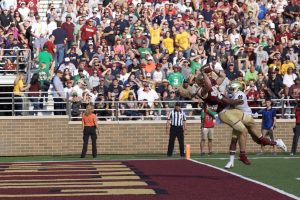 Following a controversial call to run the ball on a fourth down at the end of the first half, the Irish began to dictate the pace of the game as soon as they took possession of the ball in the third quarter.

“I didn’t want to take away the momentum and confidence Anthony Brown had,” said Addazio of his decision not to try for a long pass. “He's a young quarterback, and right now I'm responsible for his psyche.” Teammate and captain Charlie Callinan, who recorded both touchdown receptions of the game, was quick to sing Brown's praises, calling him “awesome” and a “solid player.”

The pieces of Notre Dame’s offense fell into place in front of the sold-out crowd at Alumni, with Wimbush rushing for four touchdowns, the most by a quarterback in the school’s history. Adams ran for over 130 yards on two 60-plus yard breakaways to claim control of the game.

“We got out of our gaps and we didn't tackle well at the second level,” said head coach Steve Addazio of the defensive lapses. “There's a couple times we could have gotten them, but we missed tackles and they popped us with some big runs.” 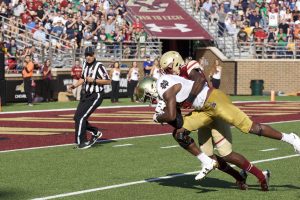 By the time the clock ran out, the Irish had rushed 515  yards for seven touchdowns. Their passing yard total didn’t even surpass one hundred, but a lack of passing turned out to be no problem in the face of a BC defense who seemed stupefied as soon as Notre Dame’s quick feet kicked in.

“There’s an awful lot of good stuff happening out there,” insisted Addazio. “We just have some personnel changes to make.”

The Eagles take to the road next week to face reigning national champion Clemson in South Carolina.