Travel and Error: Pitfalls to Avoid While Abroad

The easiest way to learn the “dos” of abroad is to understand the pitfalls of someone who accrued a fair share of abroad “don’ts.” Going abroad is exhilarating, adventurous, and awesome; however, it’s very easy to get caught up in the fun and accidentally incur some serious damages along the way. Here are a few dos and don’ts from someone who happened upon quite a few mishaps in her day. Fortunately, hindsight is 20/20, right?

Lesson 1: Think before you pack.

I arrived in the Gatwick London airport in early March carrying two duffel bags that contained enough electronics to entertain a family of four. I had packed my DSLR camera, my smaller GoPro camera, my kindle, my laptop, and my cellphone. Who’s ever going to use that many electronics, especially on a three-day trip?

After a weekend of galavanting, I found myself rushing out of my hostel on Sunday afternoon to catch my flight. Finally, I made it onto the tube to the airport with my huge backpack and duffle bag that I’d grabbed out of the hostel luggage drop. To my chagrin, I had been in such a rush that I had completely forgotten about my laptop, which was locked up in a separate hostel locker.

While the thought of keeping my prized possession far from any wandering paws had been well-intentioned, the laptop wasn’t any safer when I realized I would be hundreds of miles away from it in a few short hours. Looking back, it makes perfect sense why I left my laptop behind, considering I had so many frivolous electronics occupying both my mind and physical space.

If you’re hoping to take high-quality photos, plan to take just one camera. Or, nix the cameras completely and opt to bring only your smartphone, which is much less likely to be forgotten in foreign hostel lockers. 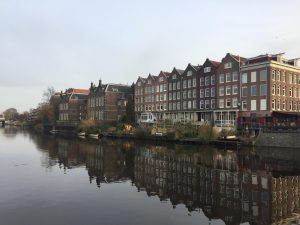 Lesson 2: Remain calm, cool, and collected, no matter what.

In the case of my trip to Madrid, I had heroically become the epitome of a minimalist. I had narrowed down my packing to just one backpack, stocked full of clothes and toiletries, and with only one small GoPro and iPhone in tow.

When I was exiting the airport to call an Uber, my phone slipped, crashed onto the cement sidewalk, and immediately died. I tried plugging it in multiple times in an attempt to revive it, but it was absolutely done with—as was I, it seemed.

With no phone and no knowledge of the city’s geography, I felt completely helpless. After quickly determining that my three years of a college education had not taught me how to use a pay phone, I reverted to what I knew best: asking a random stranger for help.

I noticed a vendor selling travel credit cards so I approached the saleswoman and tried to piece together my story in Spanish. Once she finally understood that I was in trouble and needed to connect with email, she handed over her work laptop to me.

I emailed my parents to tell them I had broken my phone, wrote down the Airbnb address on a piece of paper, and demanded that the Airbnb host stand outside of the apartment. Making it to the apartment downtown felt a bit dodgy, and I was on edge the whole cab ride there. Luckily, upon my arrival, the Airbnb host graciously let me in, allowed me to use his phone to contact friends and family, and even paid for my paella as I sat and waited for my friends to arrive.

Obviously, having a phone break in an airport is a freak accident. But just in case, I would highly recommend having some sort of backup plan for when you’re traveling. If you’re traveling alone, it may be a good idea to jot down where you’re headed, print out a map, and have a few key phone numbers memorized. Set up a plan with friends on when and where to meet up, so they can start to investigate if you don’t arrive on time.

As a side note, I also recommend—and may get in trouble for doing so—not to alert your parents immediately after something adverse happens. If it’s a problem that can be easily reconciled without getting your parents worked up halfway across the globe, it may be easier to casually bring up the predicament in a WhatsApp video call a few days after.

Lesson 3: Keep your enemies close, and your bag closer.

This story may seem the most cliché; however, I think that is why it’s the most dangerous. I had gone almost the entire semester without having any items stolen from me. Friends had had wallets and laptops stolen, and I had obviously had a few tribulations myself, but by the last weekend of abroad I assumed I was in the clear.

My last weekend of travel had been planned for months: My two friends and I would be traveling to Umag, Croatia to go to the first annual “Seastar Music Festival.” It was the final performance of the festival's first night, and we were close to the stage. In front of us a girl started panicking, saying that she had dropped her phone. People all around pulled out their phones and turned on their flashlights to help.

We'll never know if that girl had been planted or if she had actually lost her phone. All I know is that a few bumps later, my phone was not in my purse any longer. In a frenzy, I turned to my friend, who checked and too found that his phone had also been stolen right out of his front pocket.

Even when I think of that night today, I still get pangs of anger—both at myself and the perpetrators. I’m angry at myself for not being more safe with my belongings, but even more so at the thief who would take advantage of people trying to enjoy a music festival.

There are a few things I would have changed which may have prevented this unfortunate occurrence. First, I should not have brought the phone to begin with. Most of the time when you are going out abroad, consider if you actually need your phone for a night out. You won’t have phone service in the majority of foreign countries anyways, so you’re essentially toting around a very expensive camera. If there is not going to be any service and the phone will only be used for a few photos or videos, is it worth the potential risk? If you do need to bring your phone, try to bury it in a purse or interior pocket and don’t take it out until you’re out of the crowd.

Luckily for us, it could have been worse. One thing we’re accustomed to as BC students is having our IDs and credit cards attached to our phones. Definitely do not do that abroad. It’s bad enough to have a phone or wallet stolen, but to have both taken would be a disappointment of mega proportions. 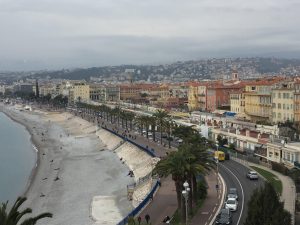 Some of these trials and tribulations may strike you at some point in your abroad experiences, or even in Boston or your hometown. While they seem like insurmountable obstacles in the moment, know that you have a fantastic support system both at BC and at home. In the grand scheme of things, these setbacks will be minor road bumps on one of the most fantastic trips of your life.