Upon entering Stokes Set, it was evident that CAB had raised the bar from last year’s event. This was the second annual fall sunset concert on Stokes Lawn, and the progression from last year's was quite evident. Archways at the lawn’s entrance were covered with soft fairy lights, and apple cider and donuts were available as a nod to the cozy fall vibe of the event.

While concert-goers streamed into the venue, the band Unit One opened for the main act. The group, comprised of Boston College students Nick Sucre, MCAS ‘19, Josh Mentzer, MCAS ‘19, and Rachel Moon, MCAS ‘19, helped foster a soothing yet energetic atmosphere perfectly in line with the crisp fall evening. The audience danced along to the tranquil tunes while chatting with friends, taking photos, and munching on the seasonal snacks. 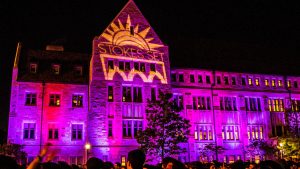 As more students arrived, the sky began to darken and calming blue lights were reflected onto the side of Stokes Hall. Suddenly, Nico & Vinz took the stage, beginning the set with their upbeat song “Our Love.”

While many students may not have been familiar with the group’s lesser-known songs, Nico & Vinz curated an inclusive atmosphere for the whole audience. They spoke words of positivity in between tracks, encouraging students to smile, dance, and clap along.

“We’ve got to have that positive energy,” they motivated the crowd.

While classes have been in session for weeks, Stokes Set fell on the first official weekend of fall. An appropriately timed event, the concert served as a great way for students to have fun and embrace the fall spirit while taking a break from the impending horror that accompanies midterms and papers.

The concert’s location next to Stokes wasn’t insignificant—although surrounded by academic buildings, students took the opportunity to destress from the pressures of the school week and enjoy a fun evening with friends and classmates.

The low-key, academic undertones of the event weren’t lost on the performers either. As the concert came to a close and the group played their popular song “Am I Wrong,” they encouraged the audience, “If this is your year, if you’re going to kill it at school this year, we’ve got to hear you sing it.” 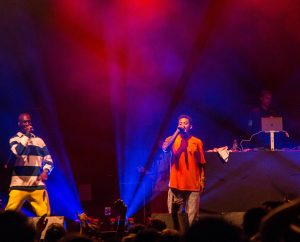 The pop duo also expressed their gratitude for the crowd’s positive energy. “10,000 miles away is where we come from,” they told the audience. “To come to Boston College for the first time and get this kind of love, we don’t take that for granted.”

Compared with the more intense atmosphere found at concerts like Plexapalooza, the lesser-known Stokes Set concert series presents a different but much-needed energy. Thanks to the upbeat and motivational spirit radiating from Nico & Vinz, the ambience on Stokes Lawn remained cheerful and relaxed throughout the evening.