Boston College men’s hockey played its first game of the season to overtime, ultimately tying the Quinnipiac Bobcats 1-1 at the end of 65 minutes.

Following a scoreless first half, the Eagles trailed the Bobcats 1-0 for most of the third period before notching their only goal of the night on the ninth power play of the game. 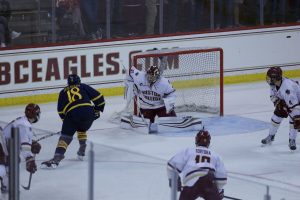 The Eagles were still clearly finding their offensive footing behind a relatively young front line. Freshman Jacob Tortora, who made a standout first appearance in the preseason exhibition win over the University of New Brunswick, brought exceptional speed and agility to a team that’s still adjusting to the loss of Austin Cangelosi and Ryan Fitzgerald.

“I really appreciated the grit of my team and the spirit on the bench tonight,” said head coach Jerry York. “It’s always good to see a young freshman bury the puck.”

Sophomores Julius Mattila, David Cotton, and goalie Joe Woll held down the fort defensively, effectively squashing Quinnipiac’s advances for most of the first two periods, with the obvious exception of the Bobcats’ only goal late in the second. Defense let up considerably in the final period, allowing QU to break away and take easy shots on goal which ultimately fell on Woll to save.

“It was a good battle of goaltenders,” said York. “The guy on my right [Woll] made us some spectacular saves, and we’re getting used to it… but we appreciate it.”

Quinnipiac’s head coach, Rand Peckhold, also praised the goaltending on both ends of the rink. “Both goalies were excellent,” he said. “Probably the two best players on the ice.” 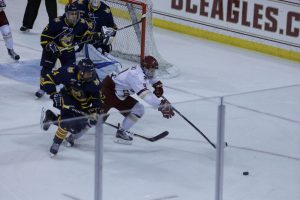 After flailing for 55 minutes with shot after shot missing the mark, the Eagles finally found the net with just four minutes left in regulation off Tortora’s zinger, his first goal as a collegiate hockey player. The tie held as the final score through the end of the third and a scoreless overtime period.

Even though it’s not quite a win, Friday’s result still has a tinge of victory and optimism for the rest of the upcoming season, starting with next Friday’s home game against #12 Wisconsin.