BC News, News
by Liam Madden 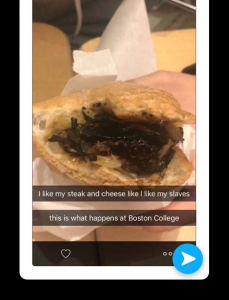 As a student of color on this campus, all I ask is for decency and respect. To deface my sign is cowardly and blatantly...

The day after Linville posted her photos, the Boston College Facebook account commented on the post and condemned the vandalism on behalf of University Spokesman Jack Dunn.

"Please know BCPD is aware of the incident and are investigating it," the comment read. "Boston College condemns all acts of hate and will hold anyone found responsible accountable."

On Sunday, Rafael Torres, MCAS '18, Co-President of the anti-racist club FACES, shared the Snapchat photo. Many people have since shared the photos and continued the call for administrative action and justice, including UGBC President Akosua Achampong, MCAS '18.

"How do you want us behave for you to listen to us? What should we do? We have advocated. We have cried. We have protested. We have marched. We have demonstrated. We have shouted. We have pushed for institutional education and change," Achampong wrote on Facebook. "This is unacceptable, BLACK LIVES MATTER AT BOSTON COLLEGE, & EVERYWHERE ELSE. WHAT CAN WE DO AGAIN? Please tell us because we can't kneel and we can't gather. We can't argue and we can't 'ask for too much at once, we must meet people where they are.' Well here I am so what's next? WE ARE TIRED. #BLACKLIVESMATTER #NOJUSTICENOPEACE."

The Gavel spoke with Torres and fellow FACES Co-President María Guerra Craniotis about their reactions to these photos. They issued a joint statement.

"It is disheartening and exasperating to witness incidents of anti-blackness on campus. We rise in solidarity with our Black community on campus, and affirm that Black lives matter at Boston College and everywhere else. Racist acts like these, on campus and beyond, are not new. Responses to past incidents have been inadequate; institutional and cultural change are necessary at BC. The administration must condemn all hatred, violence, and bigotry, and actively engage in their eradication. As students, we must confront those who hold or express racist sentiments in order to foster a campus culture that recognizes equity and the inherent value of every person. As part of our response as FACES Council, we will be distributing signs that read "Black Lives Matter" throughout campus for students to tape to their doors and backpacks. In collaboration with United Front, the Undergraduate Government of Boston College, the AHANA+ Leadership Council, and the Organization of Latin American Affairs, FACES is devising a campaign: 'Our Black Students Matter' to address recent instances of anti-blackness on campus. This is an immediate expression of solidarity, but institutional action should happen promptly."

In addition to these actions, an Organizing Rally Against Racism is scheduled to take place from 6 p.m. to 7 p.m. Monday night in O'Neill Plaza. This event will prepare for a formal registered protest on Friday.

After the signs were vandalized, Residential Life Administrator on Call Jeremy Weinberg emailed Roncalli residents.  He explained that another incident occurred on the third floor where the words "Hispanic" and "Latino" were erased from a white board promoting Hispanic Heritage Month. He also notified students that BCPD is investigating the incident and that Boston College will not tolerate this type of behavior.

"This incident should cause you a great deal of concern because it strikes at the very heart of the Roncalli community," Weinberg wrote. "This is not only an irresponsible act, but also a cowardly one that does not reflect your sensitivity and concern for one another."

UGBC and the Montserrat Coalition have both issued statements condemning the photos and expressing solidarity and sympathy with affected students.

Provost and Dean of Faculties David Quigley and Vice President for Student Affairs Barbara Jones issued a joint statement condemning the vandalism and hateful use of social media. They also wrote that individual disciplinary matters cannot be discussed publicly due to federal privacy laws, but an investigation is ongoing.

This is a developing story. Updates will be posted as new information is made available.