The Eagles snapped their five-game losing streak with a 3-1 victory over Merrimack College
Friday night. After playing top-ranked team after top-ranked team, the Eagles finally faced an
opponent they were better than and grabbed a much-needed win.

The first period was a slow start for the Eagles, who squandered two power play opportunities
early on. Later, Fitzgerald was handed a penalty for hitting from behind at 14:43 but 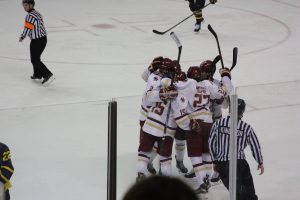 BC was able to kill the penalty. Despite the lack of offense generated, the Eagles were dominating 22 shots to Merrimack’s 11 and Chris Brown particularly won a disproportionate amount of face-offs, 7-3. The opportunities were there but the Eagles were unable to finish.
Boston College came back on the ice for the second period looking ready to make something happen but it was Merrimack who struck first. Kovacevik skated into the perfect opportunity when the puck slipped
away from mayhem in front of the net to the slot, and he fired his shot through the mass of bodies heavily screening Woll and beat him.

Boston College was able to tie it up just a few minutes later when Jesper Mattila scored his first goal of the season. The Eagles quickly brought the puck down the ice with superb passing that
rendered the Merrimack forecheck useless. Christopher Grando found Aapeli Räsänen at the top of the left face-off circle, but it was a streaking Mattila who buried the puck. The momentum from this spectacular goal would set the tone for the rest of the match-up.

In an exciting moment with only 10 seconds left to play in the 2nd, freshman Jacob Tortora blew past the entire Merrimack defense to take a shot from right in front of the goal, but goalkeeper Craig Pantano was able to stop him. 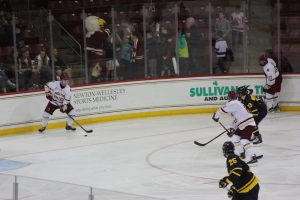 With a disappointing lack of goal scoring against a team they were dominating, junior JD Dudek stepped up to make things happen at 12:15. With some maneuvering, Dudek undressed his defender and skated below the face-off circle. He rifled a shot over Patantano’s far glove side to light the lamp for BC and finally give the team the lead.

An empty netter from Christopher Brown with 8.2 seconds left in the third sealed the deal and the Eagles notched their first win on home ice in the season, bringing their overall record to 2-5- 1.

Coach York walked away from the game optimistic. “Our club is going to get better and better. There are going to be ups and downs, it's never going to just be linear through the year but it was a much needed W for a team and now we get some rest, go back out there and play tomorrow. We’re in that mode now.”

JD Dudek has been struggling with injury, but shined last night. York heaped
praise on the junior, “JD’s been hurt most of the year, he’s been banged up in a lot of different
areas. But he fought through those different aches and pains and sprains. Just about anything
he could have he has and he had a huge goal top shelf far side, a real goal scorers goal.”

Dudek himself was rather humble and optimistic on moving forward, “It was a huge goal and I
was just fortunate that I was put in the opportunity to score for us and it was exactly what we
needed to start the weekend and to start this new chapter of our season and get on winning
ways again.” He added, “I like how we played a lot, we knew it was going to be a tight game
with the style that Merrimack plays and we just have to capitalize on every opportunity we get
cause we know we aren’t going to get many.”

York does not see the punishing schedule as a negative for the team. “The best mindset, which
we always try to encourage here at BC is that our next opponent is our biggest opponent, and
focus on that. We try to have a challenging schedule, and have teams that are on our level. You
get in our league and boy, our league opponents are difficult for us and we feel that way. The
more demanding our schedule the better. We don’t play high school because then you don’t
know how good you are and where you stand. We try to play as many quality opponents as
possible.”

The Eagles will face Merrimack again at Volpe Saturday night.