BC News, News
by Liam Madden

On Wednesday, U.S. Senator and former presidential candidate Bernie Sanders (I-Vt.) wrote a letter addressed to Boston College President Fr. Leahy that encouraged the university to drop its appeal of the National Labor Relations Board's (NLRB) decision to allow BC graduate research and teaching assistants to unionize. The full text of the letter can be found below.

The letter argues that "unions help advance the dignity and economic position of workers by allowing them to collectively bargain for better wages, benefits, and working conditions."

Sanders referenced the 13 other universities that have recently held union votes and the work he has done with unions at the University of Vermont.

"These individuals are more invested than ever in the important research and teaching they do," Sanders wrote, "precisely because they have a greater voice in the workplace."

A similar letter was sent to the presidents of a number of other universities that have students pushing for the recognition of their unions.

The letter was sent on the same day as a demonstration took place at 3 p.m. on O'Neill Plaza, planned by BCGEU-UAW, calling for BC to drop its appeal and recognize the union.

"The Trump administration's values are not BC's values," said graduate employee Victoria Gabriele in a union press release. "We have a long Jesuit tradition of respecting labor rights, lifting up disenfranchised communities, and working for positive social change. We are calling BC to stand with us." 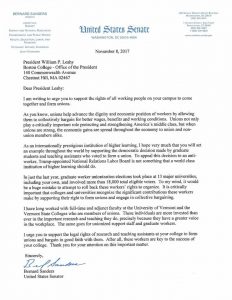 The NLRB ruled in May that BC's graduate employees were covered under the National Labor Relations Act. Students voted to certify BCGEU-UAW as their official union on Sept. 13, after BC unsuccessfully filed a motion to stay the election.

Since the election, BC has not recognized the union and is instead filing an appeal to the NLRB to overturn the ruling. Since his inauguration, President Trump has confirmed two new contentious board members and appointed an acting chairman. These members are widely seen as less likely to support pro-union decisions than the previous NLRB.