After scoring Boston College’s last two baskets, Ky Bowman started to feel the energy of his team and the crowd pickup. Running in transition after a Deontae Hawkins rebound, Bowman surveyed his options, saw he had some space, and pulled up to knock down a 23-foot jumper.

BC went up by 12 after Bowman’s one man 7-0 run and never looked back. The Eagles beat Maine, 85-65, earning its first win to start a new season.

Bowman finished with 18 points while his backcourt mate and preseason Jerry West watch list member Jerome Robinson matched him with 18 of his own. The pair tied for the scoring lead. Robinson played much of the game battling a nagging right calf issue he struggled with in preseason. 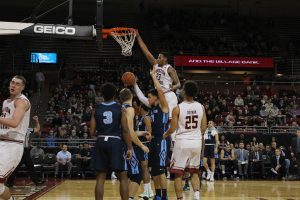 Coaches later said that the injury is a non-issue, and after some treatment at the end of the bench Robinson seemed to move around fine on the sideline.

“I thought that we came out of the game and shot too many jump shots, but I was proud of our defense the whole night,” said fourth year head coach Jim Christian.

After last year’s season opening debacle against Nicholls State, Christian had to be happy with his team handling the opener with relative ease. But when asked about this opener as opposed to last year’s upset the coach had nothing to say.“There’s nothing to say about that. That was last year. We’re 1-0 and that’s all you can ask for.”

Christian emphasized the efficiency and pace of his club, one that (only) turned the ball over eight times the whole night and took 68 shots.

New addition Deonte Hawkins made an instant impact, finishing with 13 points and 15 rebounds. Hawkins gave the Eagles a second very capable big and another strong offensive option to go along with Bowman, Robinson, and Jordan Chatman. When asked about his first game with BC, Hawkins acknowledged he knocked down some shots, but it wasn’t what he wanted to talk about. 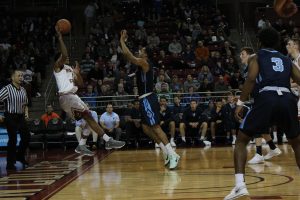 “Rebounds,” the graduate transfer from Illinois State exclaimed. “Coach emphasized rebounding the ball and getting myself going and that’s what I did.”

Hawkin’s front-court partner, on the other hand, did not share the same success. Sophomore Nik Popovic battled foul trouble the entire night and only finished with seven points and seven rebounds. Popovic sat much of the early minutes in the second half after a bad over-the-back call on a rebound he had no hope of getting. Christian seemed equally frustrated all night with his young center.

The most pleasant surprise of the evening had to be the play of backup center John Carlos Reyes. While Popovic battled foul trouble, Christian gave the center 21 great minutes, finishing with 12 points and six rebounds.

The Eagles will look to continue their momentum and pick up their second win of the weekend in Sunday’s game against South Carolina State at 1:00.