AJ Dillon became BC’s all-time freshman rushing leader as he clocked his fourth 100+ yard game, rushing for 196 yards on 36 carries and one touchdown. Dillon now has 1,039 rushing yards on the season. 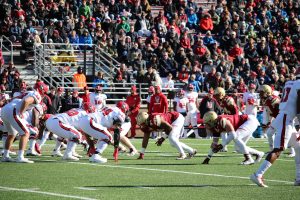 The loss of starting quarterback Anthony Brown early in the game due to injury, however, ultimately marred the Eagle’s chance for success in a game that came down to throwing ability.

BC’s Thadd Smith scored late in the third to give the Eagles the edge, 14-10, to start the fourth quarter, but NC State reclaimed the lead with 8:22 left off of a 50-yard touchdown run to hold on for the win.

“They found a way to win in the end. The stats are pretty even in the game. Obviously, we lost our starting quarterback. It was a tough deal here today,” said BC head coach Steve Addazio.

Brown went down just two minutes into the second quarter with a knee injury. The redshirt freshman scrambled to earn a first down near the red zone and buckled his knee on a cut, leaving Darius Wade to replace him for the remainder of the game.

At first, it appeared a non-issue. On Wade’s second drive, he handed the ball off to AJ Dillon who found a pocket and ran 66 yards down the left sideline for a TD. Dillon gave the Eagles the initial lead, 7-0, with 6:10 left in the second. 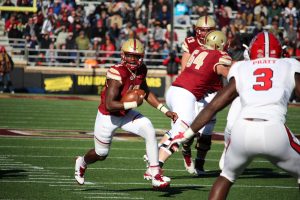 The Wolfpack responded on the following drive to tie things up. NC State then took the lead heading into the half as Kyle Bambard registered a 41-yard field goal to go up, 10-7.

With 1:30 remaining in the third, NC State looked in good positioning when it held the ball at BC’s 37-yard line, still up by three. But–perhaps confounded by BC’s sound defense–State went for a trick play, leading the wide receiver to overthrow a simple pass to quarterback Ryan Finley. BC’s Kevin Bletzer recovered the football and took it to the 23-yard line, giving BC the offensive edge.

On the same drive with just 30 seconds left in the third, Wade handed off the ball to Thadd Smith on a jet sweep. Smith ran along the left sideline and magnificently maintained his balance along the edge to just barely carry the football into the end zone.

Smith’s TD put the Eagles up, 14-10, heading into the fourth. The remaining BC game plan was simple: run the ball, take time off the clock, no tricks, simple schoolyard football.

But while the BC D-line sealed the pockets and limited the Wolfpack offense in the first three periods, it failed to stop the run down to the wire.

At 8:22 left in the game, NC State’s Nyheim Hines broke away from the pack down the right sideline for a touchdown. Hines put the Wolfpack up 17-14–a lead they would sustain for the remainder of the game.

While BC did subsequently have multiple drives with ample time left on the clock to score, Wade couldn't convert on third down with the pass (BC had no timeouts left), ultimately forcing the team to punt. On one drive, the Eagles had the chance to tie the game with a field goal, but an errant snap forced Jeff Smith to pick up the ball and try to make a play.

"I mean it was fairly obvious to see the snap kind of rolled back. Nothing Jeff could do. It was on the ground, back to the right. He had no chance to put that up and give us the chance to kick the ball," said Addazio. 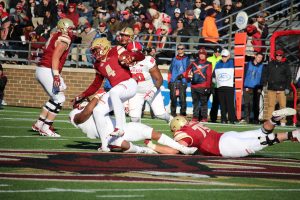 All game, NC State’s Bradley Chubb caused problems for the BC offense. The defensive end set a school record during the game as he reached 26 career sacks–2.5 of which were on Wade.

A battered Eagles team, who has lost the likes of stars Jon Baker, Connor Strachan, Harold Landry, and now, Anthony Brown and Kamrin Moore (shoulder), has continued to battle this season despite being marred by injury.

“Yeah, definitely we’ve overcome a lot of obstacles. I mean, it’s football and you have to have the mindset that anything can happen,” said Dillon when asked about the plethora of injuries this season.

“That’s one of those times where when coaches preach, you need to be ready when your number is called….So, I mean, obviously injuries are not – you don’t want to have injruies, but they happen, and that’s part of football. You just got to keep moving as a program.”

BC will play UConn at Fenway Park on Nov. 18 in its second to last game of the regular season.