BC Falls to BU in 100th Anniversary of Rivalry

One hundred years after the first edition of the Battle of Comm Ave, No. 15 Boston College fell to Boston University, 7-4, at home in the teams’ 275th meeting on the ice. While BC (8-6-2) struggled to connect on offense, the Terriers put up back-to-back three-goal periods behind a pair of Brandon Hickey goals to notch their 134th victory in the series.

Sophomore Ron Greco dominated the night for the Eagles, netting his second and third goals of the season, including the score that brought the teams into their final tie of the game. On the other side of the ice, BU senior captain Hickey tallied the second two-goal game of his career and Patrick Harper assisted on four goals to lead the Terriers in points. 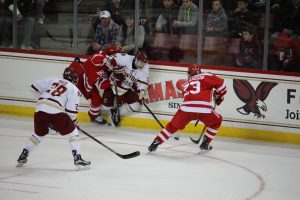 Goaltenders Joe Woll and Jake Oettinger, teammates in the 2017 World Junior Hockey championship, matched each other with 29 saves on the night. Oettinger, a key player in BU’s success since starting his very first game with the Terriers in 2016, stayed solid in the third period in the face of a BC offense thirsty for a comeback, shutting the Eagles out in the final 20 minutes.

“We had a chance to get back in it when it was 6-4, but Oettinger made a really good save on JD Dudek coming down the right side,” said head coach Jerry York of a one-on-one opportunity late in the third. “We just couldn’t get any closer. I thought BU played very well.”

The Eagles came out of the gate swinging to build an early lead. Freshman Aapeli Räsänen drew the first blood of the night. Before the student section could even finish its traditional post-goal cheer, Greco tallied his first goal of the season to put BC up 2-0 over the Terriers just two minutes into the game. 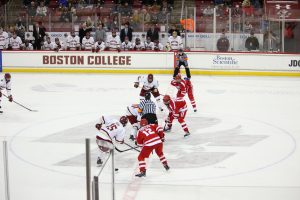 “It was 2-0 before people could put cream in their coffee, before they could take a seat,” said Terriers' head coach David Quinn. “It looked like this was gonna be a long, long night.”

After a solid first seven minutes of play, the Eagles’ pace noticeably slowed. BU finally found its footing on the ice and used a sloppy BC defense to score three-straight goals and claim the lead by the end of the first period. The Terriers made twice as many attempts on goal as the Eagles through the first 20 minutes.

“We really got excited and lost that poise,” said York.

The second period brought the kiss of death for the Eagles, as the Terriers scored another three unanswered goals after Greco’s second of the game tied the teams up briefly at 3-3. 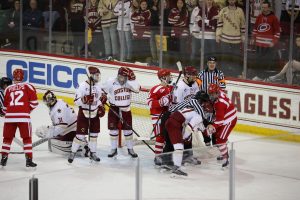 Julius Mattila closed out the frame with a shorthanded goal to make it a 6-4 game, but BU held the Eagles scoreless in the third period and added its last score on an empty BC goal 30 seconds before the final buzzer.
“One of the great things about a series like this is we have a chance to get back and redeem ourselves from this effort. We’ll recover, regroup, look at some film in the morning, and see if we can get a better effort tomorrow night.”

Next up, the Eagles travel down the B-line to face BU on its turf Saturday, Dec. 2nd at 7 pm.