News, Off Campus
by Maura Donnelly

Thousands of protesters congregated on the Cambridge Common Saturday afternoon for the Cambridge/Boston Women’s March 2018: The People Persist, exactly one year after the inauguration of President Donald Trump prompted the Women’s March on Washington and other worldwide solidarity marches.

The event was organized by The January Coalition and was co-sponsored by multiple local community organizations, including March Forward Massachusetts, the organization that led last year’s march on the Boston Common.

According to The January Coalition’s Statement of Values, they “are coming together on the first anniversary of Donald Trump’s inauguration to voice our opposition to an administration that is systematically eroding the rights of women and other marginalized people, dismantling and destroying our democracy, and putting the entire world at risk.” 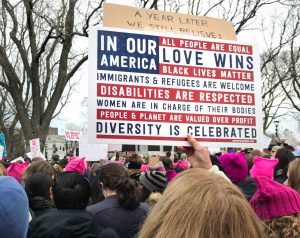 An estimated ten thousand people of all ages and backgrounds attended the rally, including women wearing pink pussy hats and carrying signs with slogans such as “Girls Just Want Fundamental Rights” and “If You’re Not Angry, You’re Not Paying Attention.”

Many signs were critical of Trump and his administration’s policies, while others called for protections for the environment, women’s rights, and marginalized communities.

A multitude of signs called specifically for legislation that will extend the Children’s Health Insurance Program (CHIP) and Deferred Action for Child Arrivals (DACA), a program which protects young children immigrants brought into the country illegally against deportation. The extension of DACA and CHIP were two priorities of the Democratic Party during the failed budget negotiations Friday night that resulted in a government shutdown.

Among the attendees was the Brick X Brick campaign, whose participants linked arms and dressed in brick-patterned jumpsuits, plastered with words Donald Trump has previously used to describe women. The demonstration served as “a symbol of [their] resistance and determination to maintain control over [women's] bodies.”

The rally was emceed by Zayda Ortiz of Indivisible Mystic Valley and provided a platform for elected officials and community activists to address the crowd.

The community speakers, who represented a range of backgrounds, identities, and perspectives, highlighted the importance of including women who are often left out of the national conversation—especially transgender, immigrant, Muslim, black, and disabled women. 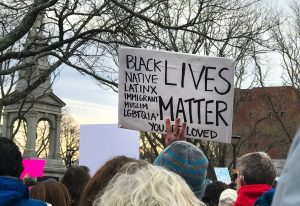 Northeastern student Alex Burger-Roy spoke up about how she and other transgender people have felt excluded from the feminist movement by the women who fail to speak up for their rights.

Tina Chéry of the Louis D. Brown Peace Institute and Andrea James of Families for Justice as Healing both called for an end to mass incarceration, which disproportionately impacts immigrant, black, and Latino communities.

Boston College students were among the thousands of people who gathered in the Cambridge Common.

Eva Ottum, LSOE ‘20, said she decided to attend the rally “to vocalize intersectional feminism, to unite with women of all backgrounds, and because my uterus is not public property.”

She continued, “I loved that there were more women of color, trans women, and disabled women speaking, and I want to see more of that representation next year.”

While Ottum appreciated that the speakers this year came from a diverse group of backgrounds, she would have liked to see more people at the march and acknowledged the need for greater movement attention and accessibility in order to achieve that goal.

As the rally began, about a dozen counter protesters congregated across the street, wearing hats and carrying flags that said “Make America Great Again.”

According to pamphlets passed out by supporters of the women’s march, the counter-protesters were members of Resist Marxism, the organization that hosted the Rally for the Republic on the Boston Common in November.

Although Resist Marxism declared that their rally was to support free speech, it drew hundreds of counter-protesters who argued that their organization has given a platform to fascists and white nationalist hate groups.