UGBC President and VP Election Kicks off With Platform Presentations

BC News, News
by Maura Donnelly

The two pairs of candidates, Reed Piercey, MCAS ‘19, and Ignacio Fletcher, MCAS ‘20, as well as Taraun Frontis, CSOM ‘19, and Aneeb Sheikh, MCAS ‘20, announced their platforms to a sizable crowd in the Vandy Cabaret Room.

Piercey and Fletcher were the first to introduce their campaign. 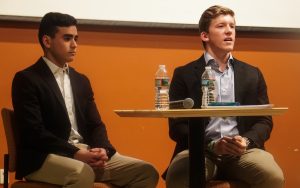 Both Piercey and Fletcher have experience as senators in the UGBC Student Assembly (SA) for the classes of 2019 and 2020, respectively. As part of the Mental Health Committee, Piercey was involved in implementing the Lean On Me initiative.

The Piercey and Fletcher campaign slogan, "We ARE BC," is reflective of the three main pillars on which they built their platform—advocacy, reliability, and engagement.

“First of all, we believe that given what happened last semester with the racist incidents on campus, effective and challenging advocacy is more crucial now than ever,” said Piercey. “The first priority of our campaign is to expand and deepen our advocacy initiatives on behalf of marginalized communities that UGBC has taken on in recent years.”

Piercey continued. “We think that this has to go hand and hand with increased accessibility and transparency on the part of UGBC, as well as a renewed focus on tangible, everyday student life improvements.”

Fletcher acknowledged that participation in UGBC elections has decreased in recent years. He brought up the results of a survey conducted by UGBC that suggests students are not aware of the organization's role on campus.

Underneath each of the three pillars of their campaign platform, Piercey and Fletcher presented their commitment to further collaboration with FACES (an anti-racism organization on campus), the establishment of a new Student Assembly chair to represent Montserrat (an organization supporting low-income students), the expansion of Eagle Escort, the formation of a LGBTQ resource center, and university-provided transportation for non-Catholic students to attend their religious places of worship.

Following Piercey and Fletcher's presentation, Frontis and Sheikh presented their campaign platform, which was created after reviewing responses from more than 150 students about what they would like to see UGBC accomplish in the next year. 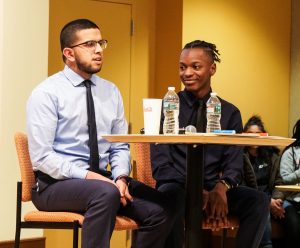 As indicated by Frontis and Sheikh's campaign slogan, "Student-Centered Change," the need for a student center was a major priority expressed by students and plays a major role in their campaign platform.

Sheikh's reasons for the necessity of a student center included the lack of space for student organizations to hold meetings and events on campus, as well as the provision of spaces to have important discussions about both campus and worldwide issues.

"We need to expand resources. We need an LGBTQ student center, and we need more spaces for students of color, students with disabilities, low-income students—the student center can do that," said Sheikh.

Frontis, who is currently chair of UGBC's AHANA+ Leadership Caucus (ALC), and Sheikh, who is a senator for the Class of 2020 in the Student Assembly (SA), asserted that they have experience working with administrators to make students' voices heard in university decisions.

Through UGBC, both Frontis and Sheikh have worked directly with administrators to implement changes proposed in the Resolution. These include getting the word out about a bias-related incident report form accessible through Agora Portal, advocating for the Africa and African Diaspora Studies program to become a department, and preparing for a new cultural competency learning module called diversity.edu that freshmen will be required to complete.

As the other candidates had done previously, Frontis and Sheikh expressed a desire to bridge the divide between UGBC and the student body by expanding a public relations campaign resolution passed by the SA under the current UGBC administration.

“We want to make UGBC more tangible; we want UGBC to be present and able to be touched by the student body," said Frontis. "I have learned that many people do not know what UGBC is or how to be involved in it. All our meetings are open. We need to make that more transparent."