"Your Problematic Fav" Emphasizes the Need for Conversation

Features, On Campus
by Molly Tucker

“Why do Asians only hang out with other Asians?”

“I want a gay best friend!”

“My black friend told me he doesn't care if I use the n-word.”

These all-too-familiar phrases often emerge from the lips of well-intentioned family members, co-workers, professors, peers, or friends. While it is uncomfortable to hear those closest to us say such problematic things, we often find it easier to move on than address the comment. However, calling people out on their racist, homophobic, ableist, transphobic, sexist, or oppressive comments is imperative.

This past Wednesday, February 27, in Fulton 220, Boston College’s largest anti-racism organization, FACES, hosted “Your Problematic Fav”. At this event, council members led a workshop aimed to arm students with a toolkit to combat similar situations in a productive, respectful manner. 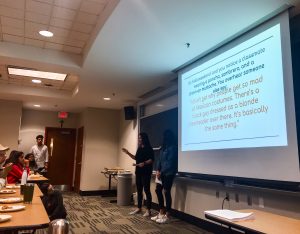 The FACES council stressed the importance of self-care in these encounters. When assessing a situation and deciding how best to speak up, it is important to consider not only how to address the person, but his or her response as well. Safety is always the priority.

With this in mind, FACES and GLC Council Member Cam Kubera, LSOE ‘20, emphasized that these conversations are often uncomfortable by nature. “It’s hard, but try to lean into the discomfort of these conversations,” he encouraged. “Try to step outside of that circle of comfort a little bit.”

Comments should be addressed if they seem offensive or just don't sit quite right. Many people, though, do not feel that they have the proper education or qualification to call someone out, correct them, or express their disagreement.

One method for engaging in these uncomfortable discussions is taking ownership of one’s own imperfections. For example, calling a friend out for misusing “triggered” can be done by saying, “I’m definitely guilty of saying that too, but I’m trying to stop because…” and explain the way that normalizing triggers minimizes the experience of people with PTSD, OCD, and other debilitating mental illnesses.

This approach mirrors the severity of the comment. Calling a non-black person of color out for using the n-word, a straight person out for using the f-word, or an able-bodied person for using the r-word often requires less of a cushion. One may assume that the people know that these terms are derogatory. Marginalized communities often use these words in an attempt to re-claim their own identity. People who do not belong to that community are not entitled to use those words. Even if one member of the community approved your usage, they cannot speak for the entire group in saying that it is acceptable. It’s as simple as that.

Why then, does it seem so hard for some people to understand? The workshop provides a simple explanation: respect–or rather, the lack thereof. Those who dub this generation “oversensitive” or “snowflakes” seem to find themselves at a loss when it comes to respecting others’ identities. Simply because something does not offend you personally doesn’t mean that it’s not offensive.

Increasing awareness is the only way to attain progress. In some cases, a calm and patient conversation is necessary. Perhaps a professor made a sexist comment; he or she would be more receptive if approached after class, as opposed to in lecture. However, some situations of blatant disrespect or aggression require a more direct and impassioned response. Regardless, anger is always valid.

Many perpetrators who act on such biases are ultimately set in their ways. That said, FACES council emphasized to attendees that it is never a waste of breath to stand up for what one believes and defend the marginalized. The goal of uncomfortable conversations is to leave them with something to think about. Asking “Would you say that if ______ was in the room?” or “Why do you think that’s ok to say?” can be enough to “mini-shame the person into not saying that anymore,” as one workshop administrator suggested.

Starting the conversation is important and continuing it is imperative.

FACES will be hosting another event on March 14, regarding Advocacy in the Arts. Applications to join the FACES council are now open as well.