Features, Outside of BC
by Jill Cusick

On Wednesday, March 14, Bostonians journeyed out to the Edward M. Kennedy Institute for the U.S. Senate to hear from Pete Souza, who served as the Chief Official White House Photographer during former President Obama’s years in office.

Although he’s known as the one behind the lens rather than in the spotlight, Souza has switched roles of late as he shares his New York Times bestselling book, Obama: An Intimate Portrait, with audiences around the country. The book is a compilation of 300 photographs, chosen out of the 1.9 million that Souza took throughout his tenure. 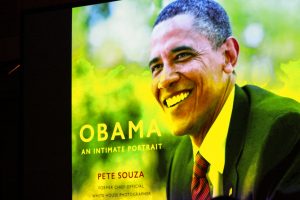 Souza first met Obama—then a senator from Illinois—back in 2005. Already familiar with each other, they established a comfortable relationship from day one of their time in the White House. Souza had previously served as a White House photographer during the Reagan administration, an experience that benefited him greatly as he took on his new role as Chief Photographer in 2009.

“I had known President Obama for four years, and I knew my way around the White House,” explained Souza. “I knew I had to establish my curve right away, [saying], ‘I’m going to be in every situation room meeting, and don’t even think about kicking me out’. And I was confident enough to have that attitude.”

Capturing the most important moments—which often last just a split second—required a high level of patience and attention on Souza’s part. He understood this when he accepted the job and never wavered in his commitment, taking only one sick day in eight years.

“The CliffNotes version of what I did was I would show up at the White House and I’d tag along with him all day long until he went home at night,” Souza told the audience. “That’s the only way you can be there to capture these once-in-a-lifetime moments, because you don’t know they’re going to happen.”

Souza began his post with the goal of creating the most comprehensive presidential photo archive in history. He emphasized that President Obama’s openness and understanding was critical in his success.

“It helps to have a guy like President Obama, who knew me, respected me, and understood the value of having a visual archive of his presidency,” said Souza.

With Obama’s permission, a Canon camera, and a Top Secret/Sensitive Compartmented Information (TS/SCI) security clearance—which, he pointed out, is higher than Jared Kushner’s—Souza set out to “capture these candid moments that not only tell you something about [Obama’s] presidency, but tell you what he’s like as a person.”

Souza took the audience at the Kennedy Institute on a behind-the-scenes journey through Obama’s years in office, describing the moments behind some of his favorite photos as he displayed them on the screen. His lens offers a uniquely intimate glimpse into the former president’s daily life, capturing Obama’s emotions during the most historical moments of his term, both the good and the bad.

A photo taken of Obama on the day Congress passed the Affordable Care Act—which Souza can attest was the happiest day of the presidency for Obama—shows him looking at a cell phone with a subtle smile on his face. According to Souza, Obama was reading congratulatory texts from friends. The photo captures such an important moment in history on a personal, intimate level that can’t be conveyed any other way.

At the same time, Souza doesn’t shy away from using his photography as a platform to address more serious issues. He shared photos taken in the aftermath of the Sandy Hook shooting in Newtown, explaining the emotional toll the tragedy took on Obama as a parent. For both Obama and Souza, that day was the worst one they faced over the eight years.

As he chose the photos for the book, Souza felt it was important to show the day that Obama met with the families of Newtown victims. Last year, Souza drove to Newtown to ask the Wheeler family—whose son Ben was killed—for permission to include an image of Ben’s mother and Obama in an emotional embrace. The family agreed, honored to have the photo included.

It’s often said that a picture is worth a thousand words, and that much was clear as Souza shared his work. One well-known photo captures Obama bending down to allow Jacob Philadelphia, a six-year-old African American boy, to touch his hair. The moment before, Jacob had told Obama, “My friends tell me my hair is just like yours.” Out of the 1.9 million images Souza took, the most meaningful ones—like this frame of Jacob—seem to make it all worth it.

However, Souza’s book extends beyond the more notable moments to include ones that, while seemingly mundane, shed light on Obama’s character. One photo shows Obama sitting on the swing set with daughter Malia, and another captures him jumping to block “bodyman” Reggie Love’s shot during a pick-up basketball game.

Beyond his book, Souza has used social media as another avenue to illustrate Obama’s presidency. During the later years of Souza’s tenure, he gained popularity on Instagram as the White House shared many of his photos publicly. Now equipped with more free time and a whopping 1.8 million followers, Souza notoriously uses his account to make not-so-subtle jabs at the Trump administration and show how Obama would have done things differently. 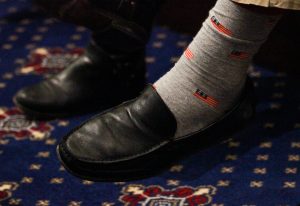 When an audience member asked Souza what it’s like to be “Instagram’s favorite troll”, he joked, “I have no idea what you’re talking about.”

“People think I have this grand strategy. It sort of happened accidentally,” he went on. “I think what I can say is that what I post, both pictures and words, on Instagram, is a lot more subtle and respectful than what some individuals say on Twitter.”

As the night came to a close, it was made abundantly clear how much Souza respects and admires former President Obama, both as a leader and as an individual. Souza explained to the audience that he was ready to leave his position after eight years of hard work. At the same time, he seemed nostalgic.

“I miss seeing him,” said Souza. “I’ve seen him about half a dozen times [since his term ended].”

Although their time in the White House is over, Obama and Souza’s legacies will both live on—with Obama’s in front of the lens and Souza’s behind it.