BC News, News
by Claire Eschricht

Fernando Lujan, CSOM '20, discussed the recovery effort in Puerto Rico following Hurricane Maria during "The Puerto Rico Crisis is Not Over: A Post Trip Testimony" talk on Wednesday night.

Months after Hurricane Maria hit Puerto Rico on Sept. 20, the recovery process is still ongoing. Many Puerto Ricans have lost homes and experienced food and medicine shortages, and there are areas of the island remaining without power to this day.

While in Puerto Rico during spring break, Lujan had the opportunity to visit the community center in Cerro Gordo, and it changed the experience and outcome of his entire trip.

At the community center, Lujan met a woman named Maria, whom he described as a symbol of hope.

“She has been through so much in her life—raising three children alone, a heart attack, a coma," said Lujan. "When I asked her how she dealt with all this and how she continued to help people she told me, ‘God put me here for a reason, and that reason is to help people.'" 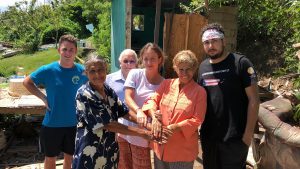 Lujan described a scene he witnessed in the center where a roomful of Puerto Ricans joined in singing "Preciosa," by Marc Anthony.

“Suddenly an entire room of people who had been through so much started singing," said Lujan. "Puerto Rico was in that room. I was drained but overwhelmed with emotion. ”

After volunteering at the center cooking food and gathering supplies, Lujan went with Maria to the mountains to help hurricane survivors. They were unsure of the state of the people they would find there. Lujan said he had never seen so much destruction in his entire life.

Lujan showed the audience a picture of a dying man he came across in one of the houses he visited. The 85-year-old man suffered from Leptospirosis, an infection caused by contact with infected animal urine. Although the image was graphic, Lujan felt that he needed to show the picture to the audience in order to convey the severity of the situation. As he spoke, the assembled students could hear the emotion in his voice.

“This is a nightmare. I thought this was over, the government said this was over. What is going on?” Lujan recalled thinking to himself.

He also described meeting a woman who sat in the same chair everyday and stared at the remains of her destroyed home that her father had built. Lujan said that she reminded him of his grandmother, and that he could not imagine the same thing happening to her. 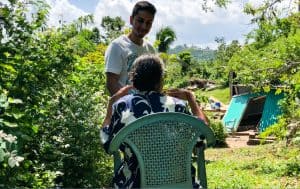 Lujan said he felt emotions that he had never felt before on this journey.

He spoke of the importance of a smile, noting, “A smile can change a life. I sought to give people hope, that I would bring what I saw and learned back to the United States and get help.”

Mar. 20 marked six months since Hurricane Maria struck Puerto Rico. Lujan told the audience that they could make donations that went directly to Maria via Venmo at @projectpuertorico.

He express hope that there would be more fundraising events on campus in support of recovery efforts in Puerto Rico.

“Hopefully next time we talk the room will be filled," said Lujan. "These people have nothing and they are smiling. I hope my stories serve to inspire others who want to help. A little can go a long way.”