Will Supple Rises to New Heights on American Idol

American Idol is best known as the televised singing competition that produced stars like Kelly Clarkson, Carrie Underwood, and Jordin Sparks. Year after year, talented contestants across the country audition to become the next American Idol, leaving their fates in the hands of three celebrity judges. As the show progresses, the success of the contestants is determined by American viewers who vote by phone or Internet.

In 2016, after 15 seasons as one of the most successful shows on American television, American Idol announced that that year's season would be its last. The show was revived this year with judges Katy Perry, Lionel Richie, and Luke Bryan, and original host Ryan Seacrest.

However, the real story here is how one of Boston College's own, Will Supple, formerly MCAS ‘19, embarked on a journey from open auditions in Boston to the Idol's top 100. His journey began one day while scrolling through Facebook, when he saw that American Idol was holding auditions in Boston and decided to give it a shot.

According to Supple, his success and involvement in singing really began when he came to BC and joined an a cappella group, The Bostonians.

“I joined the Bostonians the first week of freshman year. I hadn’t really sung a ton before," Supple admitted. "There was an a cappella group at my high school that I was in, but there were only five of us. I also did musicals here and there, but it was never ‘my thing.' I did a musical my senior year of high school and was told that I had a good voice. That’s when I sent a voice tape to BC and started doing more singing.”

Joining the Bostonians had a significant impact not only on Supple’s singing career, but also on his time and network of friends at BC. Coming into college, he knew that he wanted to join an a cappella group, and after looking up the group’s performances on Youtube, he decided that the Bostonians would be a good fit. Once he was accepted into the group, he began singing more regularly, which helped prepare him for auditioning and performing on American Idol.

“A lot of people think that the first time you audition is in front of the judges, but I went to two separate rounds before that. In my first round in Boston, a ton of talented people didn’t get chosen,” said Supple. “I had no idea how high-stakes the second round of auditions was because I was auditioning in front of executive producers of the show. They were like 'okay, you’re going to audition in front of the celebrities now.’” Luckily, he was able to keep his composure throughout the auditioning process, which he believes helped him immensely in the long run.

“I never really psyched myself out and I was weirdly calm throughout the whole thing. I made it to the top 100.”

When it came time for Supple to sing in front of the celebrities, he performed the song “Golden Slumbers” by the Beatles.

“It was ridiculous to perform for celebrities. I remember it, but I don’t remember how I felt during it. I was really nervous but was trying to pretend like I was super chill. I knew my voice was shaky and it wasn’t my best audition ever,” he said.

When it comes to a show like American Idol, a contestant is often chosen not only for their voice but also for their personality or backstory. Supple described how he had to become a salesman for himself during the audition, which wasn't shown on TV, mentioning that he believes his personality helped. Out of the three judges, Katy Perry was the least enthusiastic about his singing, according to Supple.

“Katy was least into me out of the three of them. I was most familiar with her [music]. [The judges] were the most beautiful people in person,” he said. Supple described them as being extremely kind but also very knowledgeable and honest.

Not only did Supple get to meet Katy Perry, Lionel Richie, and Luke Bryan, but he also had the opportunity to meet host Ryan Seacrest. 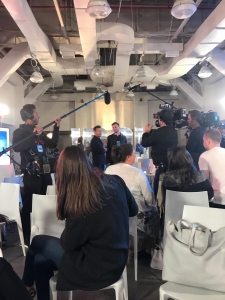 “I was one of two people that was in New York for both auditions. I was at the bottom of the list for day one and was waiting in this waiting room for 11 hours. They ended up asking me to stay for the next day. All of sudden, Ryan comes walking in and I got to do an interview with him,” Supple continued.

“Then I had to come back the second day, but at least the first day I got to meet Ryan Seacrest and it wasn’t a total bust,” he said jokingly.

A portion of Supple’s audition in front of the celebrities has now been viewed by over 280,000 people on Youtube. In the video posted by American Idol, Supple tells the judges that he can recite every single line from the movie Mean Girls, to which Katy Perry responds by demonstrating her own hidden talent: the ability to puff out her throat like a frog. This Youtube video is not the only kind of media attention Supple has received since being on American Idol. Life & Style magazine published an article titled “Will Supple Might Be 'American Idol's' Next Breakout Star but He Can Also Quote the Entire 'Mean Girls' Movie,” that describes his audition and covers some of his social media posts.

“The day that the Life & Style mag article came out, I was like okay, so I am peaking and I need to be fine with this,” said Supple, recounting the overwhelming experience of getting such media attention. Seeing himself on TV was new for both Supple and his family.

“I did see myself on TV during the auditions. I got to walk across and audition, and my parents were set up to be the reaction shot. On TV, we saw my whole family in the background. My parents paused the TV, then rewinded it and played it in slow motion,” he described humorously. Supple also made a TV appearance during Hollywood Week, when contestants who made it through the initial auditions perform first in lines in front of the judges and then in groups, facing elimination each time.

“All I did was drop my jaw for American Idol. Both times I was on some screen I was dropping my jaw,” he said, laughing.

Supple says that group round in Hollywood Week was his favorite round of the whole competition, despite being eliminated during this stage. Although the show was the most hurry-up-and-wait environment Supple has ever experienced, he noted that his group had very little stress. The Pencaps, the name his group chose after one member tried to take a pen away from another contestant and was only able to grab the pen cap, was “the most Kumbaya group,” according to Supple.

“I was so delirious, but everyone else I was around was equally delirious. That’s why I think I made so many friends at the show, because you got to the state of being like ‘this is me, take it or leave it,” he said. The friendships Supple formed with the other contestants and talented people he met through American Idol have been one of his greatest takeaways from the whole experience.

“The best outcome of all this has been the people, aside from the minute of exposure I got,” said Supple. The show has also given his music career a boost in addition to providing him with a new perspective.

“It’s a really cool platform. Some people have taken what they’ve gotten from American Idol and launched  a career somewhere else. There’s just so many names, and the list of people that were on the show in some way, shape, or form is really amazing. So to be a part of it, even though it wasn't a prominent spot, was still really cool,” he said.

Supple is currently working on an EP in a studio in Boston and is trying to arrange meetings with various labels to see if any bite. While he originally planned to move to Los Angeles soon, his experience on American Idol changed his perspective.

“I need to be a fish in a smaller pond before I go and be the exact same person as 100 other people who are doing the same thing as me. Hollywood Week made me see that I am good enough, but so are a ton of other people. It was an eye-opening experience,” he explained.

But make no mistake, Supple still believes that the entertainment industry in LA is where he ultimately belongs.

“I think LA is a place where I want to be. I had a good feeling about it when I was there for six days,” he said, referencing his time there during Hollywood Week.

Taking the time to focus solely on his music career, Supple is no longer enrolled as a BC student. His time with American Idol comes years after seeing the success of his friend Ben Stevens from the band Juice, who “blew up” in Boston and is now performing in multiple cities across the Northeast. Seeing that success firsthand and making it onto American Idol, among other motivations, has inspired Supple to strive forward in the entertainment industry and focus on his singing more than ever before.

“Seeing a friend have success lit a fire under me. I thought ‘I want to do that too.’ But I didn’t do anything about it then. I always had this dream. Then it just happened,” he said.

A tennis player, dog person, film enthusiast, cheeseburger connoisseur, and Nutmegger who enjoys writing and dreams of saving the world.