Members of the Boston College community participated in the “March Against Injustice” on Friday to call on the University to acknowledge and begin the collective bargaining process with the Boston College Graduate Employees Union-United Auto Workers (BCGEU-UAW).

The march, organized by the BCGEU-UAW, started at 12 p.m. outside Corcoran Commons, followed an accessible route up to main campus, and concluded with in the academic quad in front of Lyons Hall.

The March Against Injustice comes after a year of organizing since the majority of graduate student employees of voted in favor of unionization in an election held by the National Labor Relations Board (NLRB) in September. Prior to the election, the BC administration filed a request for a review with the NLRB and refused to bargain with the BCGEU-UAW following the election.

In response to new developments within the NLRB that suggest movement in a more anti-union direction, the union withdrew their petition. However, the setback did not discourage BCGEU-UAW from continuing to fight for collective bargaining.

With the “March Against Injustice,” the union demanded that the administration respect the results of the NLRB election, recognize the BCGEU-UAW as a legitimate union, and begin the process of collective bargaining with graduate student employees.

During the march, dozens of undergraduate and graduate students alike walked silently through campus to demonstrate their cause. Some students were holding signs with messages such as “respect our vote” and “graduate working conditions are undergraduate learning conditions.”

When students gathered in the academic quad, speakers drew attention to many of the areas which the union would like to address through collective bargaining. These issues include, but are not limited to, protections from sexual harassment, a parental leave policy, health insurance that covers dental and eye care, training for mandatory reporting, and increasing stipends to better reflect the current local housing rent and commuting costs. 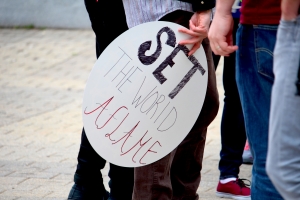 Bryn Spielvogel, GLSOE ‘20, started the rally by reading aloud from a letter from Vice President for Human Resources David Trainor that was sent to the University community in January about the status of the graduate student union process, which stated, "regardless of this legal process and its outcome, Boston College will continue to value and support our graduate students. "

After reading this note, Spielvogel asked the crowd if they felt that BC had done everything they could do to support and value graduate workers. No one raised their hand.

Spielvogel stated that members of the graduate student union have visited the offices of University President Fr. Leahy and Provost David Quigley each day this semester to request for the election results to be recognized. In recent weeks, union members have also asked to begin a dialogue on a specific issue that impacts the work of graduate employees.

However, according to Spielvogel, administrators have never been available to speak with them and the only responses the union has received “have been requests for us to stop visiting their offices, on the grounds that they are no longer legally required to recognize us.”

The union records each visit with a selfie that is posted on their Facebook page.

“The evidence suggests to me that Boston College does not respect graduate student voices regardless of legal proceedings,” said Spielvogel. “They’re relying only on a legal requirement to recognize the union, when they have an ethical requirement to do it as well.”


Julie Kushner, the Region 9A director of the United Auto Workers, connected the mission of the fight for union recognition at BC to a larger national fight for workers’ rights in education.

“It’s about graduate work all over the country,” said Kushner. “You are not just part of a BC movement, you are part of national movement in academia to change the way that workers are treated.”

Kushner drew attention to other unions who are currently organizing throughout the country, including graduate student employees at Columbia, who went on strike Tuesday because their university still refuses to recognize their union, more than a year after they won their election for union recognition.

Additionally, public school teachers in West Virginia, Oklahoma, Arizona, and Colorado have gone on strike in the past several weeks to demand higher wages and increased school funding after years of budget cuts to education.

“It’s an educators’ movement, and it is critical that you see that you are a part of it,” said Kushner. “If we all work together, we can win.”

The march was also attended by members of the Harvard Graduate Students Union - United Auto Workers (HGSU-UAW), who recently won a NLRB election for union recognition on Apr. 20.

Gabe Schwartz, a member of HGSU-UAW, thanked the BCGEU-UAW for supporting their efforts to get the word out about the union election at Harvard. 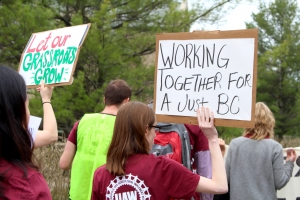 The next speaker, Professor Marilynn Johnson of the history department, urged the University to bargain with the BCGEU-UAW. She noted that the proud liberal arts tradition at BC “would not exist without graduate student workers” who grade papers and exams, lead labs and discussion sections, and make themselves available to students.

“[The faculty] know[s] that [graduate student employees] are getting emails from [students] at midnight and later, and that you are constantly on the front lines of responding to students in crisis who are afraid to come to professors,” said Johnson. “You play an absolutely vital role in the educational mission here at Boston College.”

Undergraduate student speaker Kayla Lawlor, MCAS ‘20, noted that undergraduate students are standing in solidarity with the graduate union, in part because they also have been frustrated by the University’s failure to engage in dialogue with students about their efforts to make changes at BC, most recently following the Undergraduate Government of Boston College (UGBC) resolution that called for the endowment to be divested from the fossil fuel industry earlier this month.

BCGEU-UAW member Victoria Gabriele, who works in the physics department, concluded the demonstration by emphasizing that the union will not go away.

“I hope that you will continue to stand with us as we call on BC to respect our vote, recognize our union, and come to the bargaining table in good faith,” said Gabriele. “We look forward to working with all of you, including the administration, to make Boston College a more just institution.” 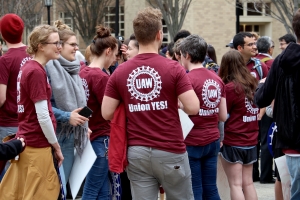 Following the march, The Gavel asked several participants about their experience at the March Against Injustice and why they decided to attend.

Josh Behrens, MCAS ‘18, described the atmosphere of the march as “electric and powerful.”

Behrens said that he chose to attend the march because he believes that undergraduate students have a “duty to stand with their graduate workers and support them.”

Behrens also expressed his disappointment in the University administration.

“Our TAs and professors should be adequately compensated and deserve to have a union to democratically represent themselves,” said Behrens.

Gage Martin, a graduate worker in the math department, participated in the march because she feels that graduate employees do essential labor at BC.

According to Martin, the most meaningful way for members of the BC community to advocate for the BCGEU-UAW is to “continue to demonstrate solidarity and stand with us as we call on the BC administration to do the right thing.”

She urged the BC community to continue to “make [their] voices heard” by sending the administration letters and emails asking them to recognize the union.

Martin described the march as an effective demonstration that reflected the deep support for starting a graduate student union at BC.

“We will continue to fight for a fair, collectively-bargained contract,” said Martin.

Kate Karafotas and Maura Donnelly contributed to this report.