BC Students Trek to Mt. Everest Base Camp

Features, Outside of BC
by Maddie Bockus

For many college kids, summertime can be rather unproductive. After the stress and chaos of finals, many students look forward to lounging on the sofa and eating good food with friends for weeks on end. But some students—like Caroline Rooney, MCAS '19—have greater, more meaningful goals on their summer bucket lists. Along with a handful of other Boston College students, Rooney took on the tremendous feat of hiking to Mt. Everest Base Camp for a charitable cause.

Rooney's motivation for the trek can be traced back to her desire to participate in 4k for Cancer, a program of the Ulman Cancer Fund for Young Adults in which 180 college students run and bike 4,000 miles across America to raise money to fight cancer. However, due to the competitive nature of this program, she could not be guaranteed the opportunity to participate. Then, one day by a chance of fate, she came across an ad on Facebook advertising an information session for an Everest trek organized by Choose a Challenge. 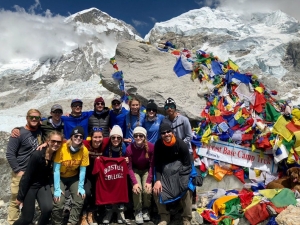 Surprisingly, Rooney, a Chicago native, has little to no hiking experience. However, what she lacks in experience, she makes up for with her athletic lifestyle, having played for several intramurals at BC and gone to the gym almost daily. “I signed up with faith in myself that my active lifestyle and love of nature would push me up to base camp,” explained Rooney. To prepare for such a trek, she focused on strengthening her legs and improving her stamina with long-endurance cardio. This meant her five-to-seven days per week at the gym had a different focus than normal and consisted of what she calls a “diligent workout plan balancing strength and cardio conditioning.”

Preparation for the trip also included buying the right equipment, of course—the Choose a Challenge program provided the hikers with an incredibly thorough packing list. Rooney purchased most of the gear from REI, whether it be trekking poles, a day pack, or hiking boots.

The journey began on May 16 when everyone bound for the trek flew out of JFK airport. Kathmandu, the capital city of Nepal, bookended the trek, with the town of Lukla, where the trek begins and ends, only a short flight away. In Kathmandu, the hikers were free to relax and explore the city. “The city was absolutely incredible, so expansive, and I feel like it has so much more to offer than the small portion I was able to see,” said Rooney. After spending time exploring and shopping in Kathmandu, the group took helicopter flights to Lukla due to limited visibility.

According to Rooney, trekking days were pretty similar. “We had breakfast at 6 or 7 a.m., depending on the length of the trip that day, breakfast would consist of toast, eggs, and tea or coffee. We’d travel around three to four hours before stopping along the trail for lunch in a teahouse. Lunch was usually pasta, fried rice, fried noodles, or the Nepalese meal Dal Bhat, which consists of white rice, lentils, and curried vegetables, and then we’d travel the remaining hours to our destination for the night,” she said. For the entire trek, the group slept in tea houses, which were mainly built specifically for trekkers. The houses were furnished with beds, full kitchens, living rooms, and occasionally running water. The tea houses acted as hotels for everyone on the trail and a place where the group could hang out and rest for the afternoons. “Resting and hanging out in the teahouses usually consisted of playing cards, reading, or journaling,” said Rooney. While trekking, bedtime was somewhere between 8:30 and 9:30 p.m.

While the schedule of trekking days may have been consistent, the trip still came with its inevitable challenges. The extreme conditions of Mt. Everest can take a significant toll on the human body—meaning that almost everyone in the group was affected by altitude sickness at one point or another. Rooney was unable to eat for four out of the ten days that were spent trekking as a result of nausea and headaches from altitude sickness.

“The morning we were going to Base Camp, I woke up with a bleeding throat caused by the dry air, nausea that caused me to miss breakfast and lunch, and on the final push to Base Camp I had such a terrible headache that I had to stop to take altitude sickness medicine,” she recalls. “Even without altitude sickness, the lack of oxygen in the air made trekking so incredibly difficult.”

Out of the group of 27, there were nine hikers, including Rooney, who stayed a few extra days to visit the Chitwan National Forest. That group of nine was delayed a day in their travel to Nepal, so their total trekking time was ten days, whereas the other students spent eleven days trekking. Rooney completed her expedition and returned to New York on June 4.

Trekking to Mt. Everest base camp is just as challenging—and emotionally and physically draining—as one would expect. But great adversity is often accompanied by even greater growth and a deepened sense of meaning.

“This was hands-down the hardest thing I have ever done in my life. I am scared of flying, hate heights, and have asthma. Why did I sign up to fly halfway around the world to climb to the foot of the top of the world?” said Rooney. “I don’t know. After the first day, complete with two helicopter rides, a six hour hike, three suspension bridges (hands down the worst part of the trek—we crossed eight total), and already being hit with altitude sickness, I thought that there was no way I’d make it to Base Camp.” 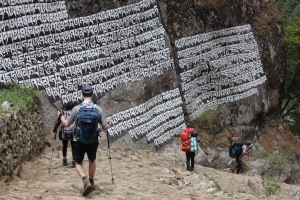 The trip forced Rooney to face her fears and put full trust in the guides, her friends, and the path in front of her. At the end of the trip, she felt “more confident in her ability to accomplish things without reservations.” When looking back on the trip, she recalls her two favorite moments: the surreal and relieving experience of reaching Base Camp, a place with so much history, and celebrating their successful trip to a tea house on the last day of trekking amidst a raging thunderstorm. Almost everyone, including the guides and sherpas, danced in the tea house living room late into the evening. Rooney formed lasting friendships with many on her trip and is keeping in contact with them via social media. While in Nepal, the group was already planning a Boston reunion in the fall.

Rooney’s story is one of overcoming fear and facing challenges head-on. “When people asked me why I was going on this trip, despite my fear of heights and flying, I would always say that I didn’t want to live in fear of challenging myself and experiencing more to life,” said Rooney. “While in Kathmandu I actually got my first tattoo to commemorate the experience because successfully completing the trip meant so much to me after so much physical and emotional exhaustion.”

For anyone interested in attempting a hike or challenge similar to Rooney’s, she recommends staying dedicated to a training regimen, bringing a book or journal to help pass the downtime while also keeping track of the trip, and making sure you have time to yourself during the trek to help recover energy levels. She also suggests getting to know who is on your trip beforehand, especially if they are fellow BC students, so that once you are in the foreign place, you at least have some familiar faces. “A trip like this can be really discouraging at times, but as cliche as it sounds, I think that you can accomplish anything you put your mind to, and a positive attitude is just as valuable as a healthy physique,” said Rooney.

A tennis player, dog person, film enthusiast, cheeseburger connoisseur, and Nutmegger who enjoys writing and dreams of saving the world.