BC Eagles, Sports
by Henry Pawelczyk

With just a couple of minutes to play, forward Trevor Davock streaked down the left flank of the field. BC and Clemson were tied at two goals apiece, and the Eagles had a prime chance to take the lead for good.

Davock sent a through ball skipping across the pitch that found senior striker Simon Enstrom at the top right corner of the box. Just a few touches later, the Eagles’ leading goal scorer added another one to his tally, giving himself five goals on the season and BC a key conference win. 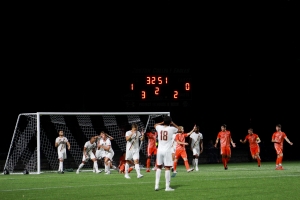 But Enstrom’s heroics did not start there. With the Eagles trailing the Tigers 2-1 after Clemson rallied for a couple goals early in the second half, Enstrom connected with a Konradsson corner kick that curled toward the near post. Looping over the goaltender’s head, Enstrom’s header landed just past the goal line to knot the game at 2-2.

With the pair of clutch goals, the star Swedish forward has been powering the Eagle offensive attack. Through four games, BC has yet to be defeated with an overall record of 2-0-2, and Enstrom’s 11 total points have been the difference maker to this point. 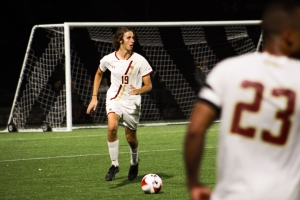 Besides Enstrom’s goals, midfielder Callum Johnson also provided a key jolt to the offense. Approximately 20 minutes into the game, Johnson created a turnover after stepping in front of a Clemson pass that immediately ignited a counter-attack. Sprinting through midfield, Johnson played give-and-go with Enstrom before tapping the ball into the back of the net from six feet out.

In the end, BC defeated Clemson for the first time since 2009. Riding the offensive surge from Enstrom and Johnson, the Eagles’ 3-2 victory on Friday night should prove to be a major turning point in a season filled with anticipation.

BC will attempt to continue their winning ways this Tuesday evening against Holy Cross. While the Crusaders (0-2-1) have yet to reach the win column this season, the rivalry game should be a hotly contested battle on Newton.