The McMullen Museum presented Carrie Mae Weems’s Strategies of Engagement at its student-exclusive Art After Dark event. The new exhibit explores history in the context of social justice activism.

By engaging the audience with historical events of conflict, the exhibit encourages its guests to participate in discussions about the demanding issues of the United States’s past and present. These issues include gender, class, and racial discrimination, as well as violence and criminal justice.

“These are conversations that we hope will engage our campus and the broader community throughout the run of the exhibition,” said Nancy Netzer, the director of the McMullen Museum of Art. 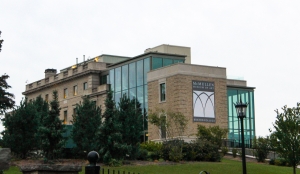 The project started during the summer of 2014 when Robin Lydenberg, a professor in the English Department, met with Netzer to discuss ideas for an exhibition that she could curate after her retirement from teaching.

“It is to Robin Lydenberg that we owe our greatest gratitude for this visionary project,” Netzer stated. “She has steered this complex endeavor with the energy, erudition, generosity and grace for which she has always been known at Boston College.”

Prof. Lydenberg has recently focused her scholarship on the relationship between text and image, conducting research on several artists who construct visual narratives.

“While her art is driven by a core concern with social justice, she is also bound to aesthetic form, using beauty as a way to seduce viewers into contemplating and having conversations about the most difficult issues” explained Lydenberg.

Weems develops an active and collaborative relationship with her audience through the use of multimedia. Weems’s exhibit invites its audience to walk among images displayed on hanging sheets of luminous fabric, immerse themselves in audio narration, and confront the systems of injustice reflected in her photography.

“The exhibition deals with a lot of difficult material” remarked Ash Anderson, co-curator for the McMullen’s newly opened exhibition. “It is meant to be something to struggle with, and at times it might even be painful. But it is also deeply engaged with beauty and a profound sense of hope.”

The exhibit will be showcased until December 13, challenging visitors to take in the political urgency and the aesthetic expression of its pieces.