As Hurricane Florence bore down on the Carolina coast just a couple hundred miles to the east, the Eagles offense similarly thrashed the Demon Deacons defense early Thursday night. Accumulating 500 total yards for the third consecutive game, the punishing attack started with the Heisman hopeful but ended with the sophomore gun slinger.

In the end, BC squeaked out of Winston-Salem 41-34, improving to 3-0 for the first time in over a decade. The Eagles now sit atop the ACC standings after defeating Wake Forest (2-1) for the third consecutive time at BB&T Field under Head Coach Steve Addazio.

Despite the eerie conditions and early game time, the Eagles remained unfazed out of the gate. After an electrifying Michael Walker kickoff gave AJ Dillon and company prime field position around the 50, it took the sophomore stud just three plays to break a big run. Bouncing out towards the sideline, Dillon accelerated past the final Demon Deacon defender 45 yards to the house to put BC up 7-0 early. 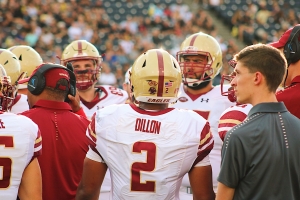 Throughout the rest of the night, Dillon would continue to grind for tough yards. Offensive Coordinator Scott Loeffler planned to get his star running back 30 plus carries in his first full game, and Dillon delivered. By the final whistle, he amassed 185 yards on the ground to top off his sole touchdown run.

Yet, after the quick BC start that saw the Eagles drive down the field for an opening touchdown in their third straight game, Wake Forest continued to fight back. Despite early mistakes by true freshman quarterback Sam Hartman that allowed Will Harris and Hamp Cheevers to snag a couple interceptions, the Demon Deacons found a way.

Whether it be by pouncing on a blocked BC punt in the endzone or recovering a muffed Michael Walker punt return in their own red zone, Wake took advantage of a couple BC miscues. As the BC special teams unit continued to struggle after conceding two blocked punt touchdowns to Holy Cross the week before, the Demon Deacons capitalized and jumped out to a 21-14 lead with a little over four minutes left in the first half.

However, that would be the largest Wake lead. Enter Anthony Brown.

Marching down the field just before the half, Brown dropped a dime of a deep pass to Kobay White for the 35 yard touchdown, taking only three plays to tie the game at 21 apiece before the intermission.

Once both teams returned to the field, the aerial attack only intensified. Although BC failed to record a single snap inside the Demon Deacons’ 20 yard line, Brown continued to find his receiving core all over the field. Keeping the Wake Forest secondary guessing with play action pass after play action pass, it seemed as if every time Brown dialed up a deep ball an Eagles receiver was running free.

In particular, senior wideout Jeff Smith had a huge game. Compiling a total of 145 yards through the air, Smith led the receiving corps in yards and touchdowns after reeling in a couple long passes from Brown. Overall, while it was Wake’s trio of receivers that have been regarded as one of the top bunches in the conference, BC dominated the Demon Deacon secondary for a majority of the game. 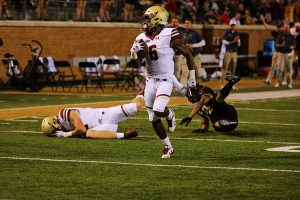 All in all, Brown finished his career day with 304 yards through the air and five touchdowns. The sophomore signal caller has been sensational this season since returning from injury, tallying 9 TDs and 0 INTs throughout three games.

In Addazio’s eyes, the ground attack and passing game worked perfectly in tandem. “We knew we wanted to throw the ball tonight, and we knew there would be opportunities in the play action game because the safeties would be violently coming into the box,” the sixth year head coach noted.

However, Anthony Brown was’t the only player to have a career night. On the other side of the ball, defensive end Wyatt Ray broke a long-standing single game BC sack record. Having bothered Hartman all night long, Wyatt notched his fourth sack of the game late in the last quarter to break Mathias Kiwanuka’s old milestone.

BC will now turn their attention to Purdue. Despite dropping each of their first two matchups, the Boilermakers are a dangerous team who should provide another key road test a week from this Saturday in West Lafayette.