Home›Sports›BC Eagles›Stock up or Stock Down: BC Football Draft Watch

Stock up or Stock Down: BC Football Draft Watch

Now ranked #23 in the nation, Boston College football is recieving some well-earned recognition with its first AP Poll top 25 ranking since 2008. The Eagles closed their 2017 campaign by winning 5 of their last 7 games, and they've carried that momentum into this season, getting off to a 3-0 start. Head Coach Steve Addazio and Heisman trophy candidate AJ Dillon have received most of the media attention and credit for the program’s revival, but a group of upperclassmen have stepped up their game and put NFL scouts on notice. We’re going to take a look at some BC upperclassmen who have already been moving on draft boards in the young season. 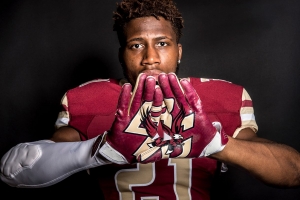 One of the premier defensive backs in all of college football, Denis has done nothing but impress so far this year. Denis needed only limited snaps in the season opener to show why he is one of the most dangerous ballhawks in America. Just before halftime, he intercepted a deflected ball near midfield and sped past the reeling Holy Cross offense down the field for a pick-six. The senior displayed the elite awareness and athleticism that helped him lead the entire country in interceptions the year before. In terms of tackling, Denis held a clinic last Thursday at Wake Forest when he racked up nine tackles (seven solo). He was a nightmare matchup for Wake’s freshman quarterback Sam Hartman, who struggled to create offense through the air and was often hesitant to throw Denis’ way.

Denis has been a terror in BC's secondary, and he will aim to continue the trend of Eagle defensive backs turning pro; Issac Yiadom and Kamrin Moore were drafted last spring. Though he is on the smaller side for a safety, coming in at a mere 5'11 and 185 pounds, Lukas Denis dominates with excellent ball skills, intelligence, and tackling, making it easy to see why he’s at the top of many draft experts’ big boards. Look for his name to be called sometime in the second round, and perhaps even in the first if he continues his impressive early season play.

The Verdict: Stock Up 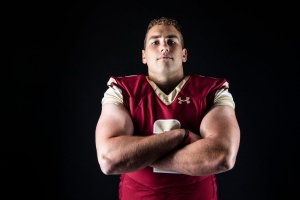 For the second straight year, there is a defensive end prospect generating first round buzz in Chestnut Hill. Last year, Harold Landry was seen as a surefire top 15 pick before injuries caused him to slide into the early second round. This year, Zach Allen anchors a ferocious front line that is tied for eighth nationally, with 11 sacks in only three games. It will be tough for Allen to match last year’s 100 tackles and 15.5 tackles for loss, but don’t let the potential dip in statistical production fool you. Allen is getting less playing time thanks to a few out-of-conference blowouts and has received much more attention from opponents’ offensive schemes in the absence of Landry. At 6’4 and 284 pounds—a size more similarly resembling that of a defensive tackle—the senior is a hulking presence on the edge. Although quick for his frame, Allen mainly relies on brute power coupled with quick hands and sound technique to bully offensive tackles and get into the backfield.

With mid first-round hype already associated with his name, Zach Allen will be looking to clinch a Top 10 pick. This, of course, is dependent upon strong showings during a challenging late fall stretch against Miami, Clemson, and Virginia Tech. If Allen can maintain his level of play throughout those games, we might see a first-round pick on the Heights for the first time since 2012, when Luke Kuechly went ninth overall. 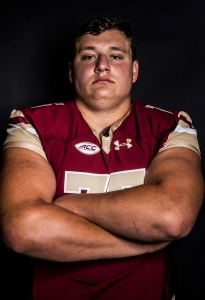 Lindstrom isn’t a trendy name on the national stage just yet, but he is just as big a reason as any for BC’s success and AJ Dillon’s explosion. Although he saw time at both right guard and tackle last season, the 6’4, 310 pound senior is projected by most scouts to play on the inside at guard in the NFL. Lindstrom inherited his mean-streak from his father, a former Boston University star and NFL player. That fiery mentality combined with exemplary mobility allows Lindstrom to finish blocks and create running lanes down the field. Chris Lindstrom was a second All-ACC pick last season and surfaced as the highest ranked player on a stacked offensive line.

Lindstrom is the catalyst for one of the deadliest running attacks in America and may very well push Dillon into the thick of the Heisman race come December. Be sure to watch specifically for number 75 during BC’s marquee matchup against Clemson in early November, where the lineman will get NFL-quality reps against a defensive front loaded with first-round talent. As of now, it's looking as if Lindstrom will be called sometime on the earlier side of the second day, though his specific draft position will also depend on performance in big games later in the season.

The Verdict: Stock Up

As a die hard Philly sports fan, there are very few things that I hate more than Philly sports. At least BC sports are never disappointing...