In an ACC-Big Ten crossover, the No. 23 Boston College Eagles suffered an agonizing defeat against the Purdue Boilermakers Saturday afternoon, losing 30-13. Hopes were high coming into Saturday’s game after last week’s victory over Wake Forest, which propelled the Eagles into the AP Top-25 for the first time since 2008. Yet, the Eagles failed to back up that ranking against Purdue with an ugly showing on both sides of the ball.

Purdue’s offense started rolling right out of the gate, taking a 7-0 lead on DJ Knox’s goal-line run, capping off a 62-yard drive in their first possession. Purdue converted on third down three times during the drive, a common theme throughout the game.

Michael Walker’s 60-yard return on the ensuing kickoff set the Eagles up for a well-executed touchdown from Anthony Brown to Tommy Sweeney, tying the game at 7-7. The score would remain tied going into the second quarter. 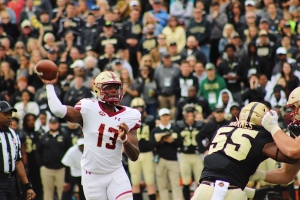 But it would only get worse from there.

Purdue’s top offensive weapon Rondale Moore unleashed a 70-yard touchdown at the beginning of the second quarter after a missed tackle from safety Will Harris. Moore’s knee appeared to hit the ground at first glance, but after further review, the officiating crew deemed the evidence inconclusive. The touchdown stood, giving Purdue a 13-7 lead with 14:40 to go in the half.

Purdue held onto that lead for the rest of the game thanks to stellar play from their defense. The Eagles followed up Sweeney's touchdown with four possessions of -18 total yards, ending the second quarter with an interception by Purdue’s Kai Higgins.

Another touchdown from Moore and a 21-yard field goal off the Higgins interception put the Boilermakers up 23-7 at the end of the first half.

Even Steve Addazio couldn’t believe what he was seeing from the Eagles. “On both sides of the ball, we’ve done some of the dumbest things I’ve seen us do ever,” the coach stated at halftime.

The second half was more of the same for BC. The Eagles could not get anything going on offense with their next five possessions resulting in a punt, three interceptions, and a failed fourth down conversion. Purdue would add another touchdown with five minutes to go in the third quarter, extending their lead to 23 points.

After replacing Anthony Brown at quarterback, EJ Perry put together a solid drive with a touchdown, ending a miserable afternoon in West Lafayette with a final score of 30-13.

On offense, Purdue impressed when the pressure was on, converting on 8 of 17 third downs. Quarterback David Blough dissected the BC secondary, connecting on 21 passes for 296 yards and three touchdowns. Moore caught two of those touchdowns, proving why he is one of the most exciting players in all of college football. 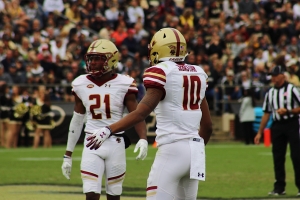 BC’s performance lives and dies with their offensive leaders Anthony Brown and AJ Dillon. However, neither could muster anything against the formidable Purdue defense. After leading the NCAA in passing efficiency, Brown finished 13-27 for only 96 yards with one touchdown and four interceptions. Dillon rushed for a season-low 59 yards on 19 carries, a performance that may hinder his campaign for the Heisman Trophy.

Nonetheless, BC’s defensive line remained a force throughout the game. The Eagles recorded five sacks and compiled nine tackles for a total loss of 48 yards. Though the Eagles conceded four interceptions, the Boilermakers only scored three points off of these turnovers. However, a couple of dropped interceptions and coverage miscommunications from the secondary allowed the Boilermakers to move up the field at numerous points in the game.

One of the bright spots of the day was kick-returner Michael Walker, who amassed 183 yards on five returns and put the Eagles in good field position after each kickoff. Ben Glines also impressed with 37 total yards in the last two drives.

It was Purdue’s first win of the season and their first win against a ranked opponent since 2011. After three close games in which they lost by a combined total of eight points, the Boilermakers finally pulled off a dominant win in Jeff Brohm’s second season as head coach. 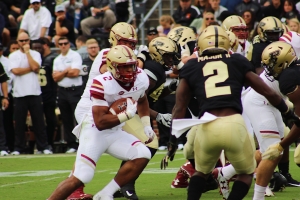 For the Eagles, their stay in the top-25 appears to be short lived, as they fall to 3-1 on the season.

Despite a dismal performance on Saturday, there is still plenty of hope for this Boston College team to exceed expectations and make noise in the ACC. The Eagles will have a chance to bounce back next weekend against a red-hot Temple team at home. The Eagles' response to Temple will determine which direction this team is headed as they look to push into contention for the ACC crown.