Boston College was down 28-16 and driving inside the Wolfpack 10-yard line when a controversial fumble call handed NC State the football with 6:09 left in the fourth quarter. The Eagles argued that running back Ben Glines' forward progress had been stopped, but the referees hadn’t blown the whistle. The fumble stood as called. 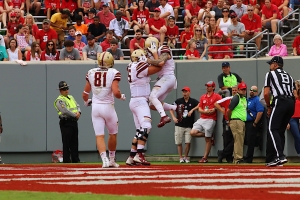 On the ensuing drive, the Eagles blocked NC State’s punt and recovered the ball in the end-zone for a touchdown, cutting the Wolfpack lead to just five points. Unfortunately, this would prove to be too little too late as the Wolfpack recovered the BC onside kickoff attempt and were able to run the time off the clock.

After being wholly outmatched for much of the game, the Eagles showed some late signs of life. However, NC State held on to its lead and took down BC by a final score of 28-23.

The Wolfpack opened the scoring in the first quarter with a long touchdown drive capped off by a three-yard rushing touchdown by senior tailback Reggie Gallaspy Jr. The Eagles would respond by recovering a muffed punt and kicking a field goal to bring the deficit to 7-3. 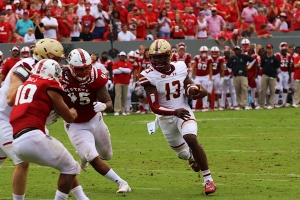 Despite two interceptions by the Eagles' defense in the second quarter, BC's offense struggled to find its way. NC State took advantage of this opportunity and scored twice in the quarter. Gallaspy Jr. scored his second of the game on a short run, followed by a Jakobi Meyers four-yard receiving touchdown that highlighted a huge first half for the wideout. The junior had nine receptions for 83 yards in the first half alone.

The third quarter picked up with much of the same lost momentum. Eagles special teams came up with a huge blocked field goal, but once again, the BC offense was unable to get anything going. The Wolfpack capitalized with a well executed 34-yard passing touchdown from quarterback Ryan Finley to receiver Kelvin Harmon.

Finally, the Eagles were able to respond with their first touchdown of the afternoon. A 28-yard run from quarterback Anthony Brown set up a 21-yard rushing touchdown by Ben Glines, cutting the Wolfpack lead to 28-10 at the end of the third.

BC's defense was able to force yet another turnover as Will Harris recovered a fumble early on in the fourth quarter. The Eagles fought deep into Wolfpack territory as Brown hit a wide open Michael Walker for 46 yards to kick off the drive. Four plays later, Brown converted a fourth down attempt by finding Glines for an 11-yard touchdown, bringing the score to 28-16 NC State.

After another quick stop from the BC defense, the Eagles looked to be driving again. However, the controversial Glines fumble all but sealed the game, as NC State would go on to win by a score of 28-23.

The Eagles were without star running back A.J. Dillon. The sophomore star injured his ankle in last week’s win over Temple. Junior running back Glines filled in well, scoring two touchdowns. However, the absence of a game changer like Dillon hurt the Eagles, as they struggled to move the ball until late in the third quarter.

One major difference between the teams came in third down offenses. The Eagles finished the day just 1-10 in converting third downs, yet the Wolfpack showed an ability to extend its offensive drives, finishing with 10-15.

BC quarterback Anthony Brown struggled for much of the game, consistently missing open receivers downfield. He finished with 198 passing yards, 136 of which came in the fourth quarter.

With the win, NC State will bring its undefeated record on the road to face fourth ranked Clemson next week.

The Eagles, on the other hand, will look to get back on track at home next weekend against Louisville.