Features, On Campus, Outside of BC
by Caroline Blessing

The phrase “free public higher education” is now a seemingly obsolete sentiment associated with the 2016 efforts of Vermont Senator-turned-presidential-candidate, Bernie Sanders. He campaigned on the ideology that access to free higher education is the best way to climb the socioeconomic ladder. Advocates of a nationwide program of free colleges say that giving everyone access to higher education would not only help low income students break into the middle class, but it would produce a better-qualified workforce for the nation’s economy.

Many areas of the country offer students aid in covering college costs. Last year, New York state initiated a program allowing in-state students of lower and middle class families to enroll in its two- and four-year public colleges free of tuition. However, a disparity still remains in the famed “college town” of Boston. Amongst the myriad of public and private institutions, various college-aged individuals are neglected educational opportunities.

The Massachusetts Institute of Technology (MIT) is one such prestigious, private institution. Dr. Jonathan King is a professor of molecular biology at MIT and chair of the Nuclear Abolition Committee of Massachusetts Peace Action. Recognizing the city’s educational discrepancies, he has worked to implement initiatives to inform Boston students, faculty, and residents alike of the importance of free public higher education. “Students need to understand that for a majority of U.S. families, tuition and costs at private colleges are beyond their means,” he explains, “and they need to be reminded of a basic tenet in the U.S.: that quality public education should be available to all. That is the case in most states for K-12 education. In this stage of human society that needs to be extended to higher education.” 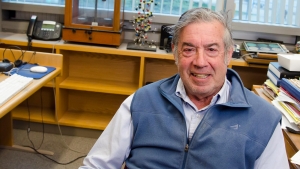 King hosts a lecture series called Investing in Minds Not Missiles, where he speaks to the imbalance of federal spending on war efforts and weaponry over public education. Long involved in issues of science and society, King has been largely concerned with the effects of inefficient spending on scientific schooling and research. “I begin [the lecture] with the importance of federal funding for our basic infrastructure, highways, trains, public housing, biomedical research, environmental protection,” he says. “Then I cover the history of federal support for higher education, starting with the land-grant universities, then the GI Bill providing free tuition for veterans, as well as the National Defense Education Act which was a response to Sputnik.”

King discusses the benefits and costs of Sanders’ proposal for tuition-free higher education, explaining that such costs are substantially “small compared to the inflated Pentagon budget.” He concludes that Americans would be safer and better off by buying fewer nuclear submarines, and instead, financing higher education for all high school graduates.

Vastly different from Sanders’ proposal, the Trump administration has built a narrative that four-year degrees have been overemphasized. Rather than press universities on affordability, it has sought to tax them and promote alternative paths for students. President Trump has expressed that universities aren’t for everyone, essentially narrowing college access, especially for low-income students. Republican lawmakers have made such public institutions more vulnerable, both nationally and in the greater Boston area. “In almost every state Republican lawmakers have led efforts to cut back financing of public education,” King articulates. “As President Madison said, ‘Education is the true foundation of civil liberty.’ Cutting funding is the most effective way of limited access to education for most citizens.”

College students, particularly those who attend affluent private institutions like Boston College, are astonishingly unaware of the discrepancies within the public higher education system. It is easy for students in the BC bubble to be content with the opportunities and resources available at hand, but for many in the same age cohort, these assets are not freely accessible. “Since the role of Boston College is to broadly educate its students, where the College has ignored important social needs, particularly of its surrounding communities, students need to press for additional instruction—outside lectures, new courses, expanding content of courses,” King says. “Affordable housing, public education, accessible health care are some of the arenas that probably need beefing up in the curricula or environment.”

As students enter voting season, it is important to consider the privileges that allow them to attend such prestigious universities and to utilize their education to make informed decisions for the benefit of academic accessibility.

Ask me about my dogs and the podcasts I'm listening to.