Serena Williams made it to the US Open finals over a month ago, yet talk of the match is still widely circulating the media. The final between Serena Williams and Naomi Osaka on Sept. 8 caused uproar in the tennis community and beyond. Serena Williams received multiple code violations: a warning for coaching, a point penalty for smashing her racket, and, finally, a game deduction for verbal abuse.

Coaching and smashing one’s rackets are undoubtedly against the rules for a Grand Slam final. This is not what is up for debate. The controversy surrounds whether the same penalties would have been administered to a male player and if they would have been conveyed in a similar fashion. Additionally, a lot of concern resulted in the way the media handled the event. Many viewed the interaction as a “meltdown” on Serena’s part, while, if it were a man on the court, the behavior may have been characterized as a display of frustration by a passionate competitor.

Williams certainly did smash her racket, and her coach, Patrick Mouratoglou, did admit to coaching. However, if Serena received the feedback or perceived the coaching (a suggestion to move up to the net) is a different story. Mouratoglou said Osaka’s coach was blatantly coaching as well and not reprimanded once despite the infraction.

Additionally, Serena received a game deduction due to verbal abuse towards the umpire. This is where the controversy climaxed. Serena accused the umpire, Carlos Ramos, of being a thief and treating her differently as a female athlete. "I have never cheated in my life. I have a daughter and I stand for what's right for her. I've never cheated and you owe me an apology,” Williams said. As an umpire who needed to retain control and assert his authority, it is understandable that Ramos did not issue an apology. However, he could have easily responded and de-escalated the situation immediately.

It is hard to know whether Ramos was acting with a sexist agenda (who knows if he would have responded in the exact same way had it been a male player) or if he was steadfastly holding true to the rulebook. Ramos has a reputation for being extremely strict and has had many conflicts with male players in the past—including Murray and Nadal—for this very reason over the years. However, this action was an anomaly in a Grand Slam championship.

In the end, though, the role of an umpire is best carried out when staying as far from the limelight as possible. An umpire is never supposed to attract attention to him or herself, and in this aspect Ramos epically failed.

This is not an isolated event. Tennis as a whole, particularly its antiquated rules that primarily affect women, has been under intense scrutiny this year. After the French Open, Serena Williams’ (may I say badass) catsuit was banned and deemed “inappropriate.” Fans of the superstar were in disbelief and fought the verdict. Williams handled this with extreme grace and did not add fuel to the fire. Then, weeks later, in the first few rounds of the US Open, Alizé Cornet was given a violation for changing shirts on the court. The United States Tennis Association (USTA) then altered the rule, allowing women to change shirts on the court—as men have always been able to do—without fear of receiving a conduct violation.

The debate of sexism in this highly traditional sport is long overdue and finally bubbling to the surface. Serena Williams, as a top-performing black woman, has shattered glass ceiling after glass ceiling in tennis. Whether this specific match was a display of racism or sexism, the ridicule Serena has faced throughout her career is undeniable. Her anger and pain is understandable and justified. Anyone who disagrees just needs to look at the cartoons and papers that resulted from this year’s US Open final; they disgustingly portray the greatest athlete of our generation. 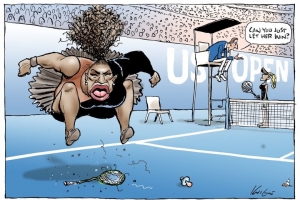 In the days following the match, Mark Knight of the Herald Sun released a cartoon depicting Williams throwing a tantrum on the court. Williams is drawn to terrible scale in an animalistic fashion. The cartoon is racist and portrays Williams in a derogatory and painfully inappropriate way. Additionally, Knight depicts Osaka, a Japanese-American woman, as a tall, skinny, white blonde. Understandably, some were outraged by this cartoon. However, Knight (and the Herald Sun) refused to issue an apology to either player.

Serena will keep fighting the way she knows best: winning. She has faced countless attacks. She has been forced to boycott the Indian Wells tournament for years due to explicit threats, boos, and racist remarks. She has been body shamed. She has been ridiculed for her parenting while pursuing her career. She has been called a gorilla. She has been made fun of on national television for her grunts and competitive nature. She has been called derogatory names and had things thrown at her as she walked onto the court. She has continued to make far less than male players she has surpassed in achievements and rank. She has fought with grace, power, and bravery. She continues to pave a path for all those who come after her who are marginalized for whatever reason. She fights valiantly on and off the court and continues to teach us all what it means to be a true champion.