On Oct. 16, the Emerging Leader Program hosted Rena Ferber Finder, one of the few living Holocaust survivors. Dozens of Boston College students attended the event and had the opportunity to hear a direct account of Fiber's experiences.

Rena Ferber Finder was a mere ten years old when the Nazis invaded her home city of Krakow, Poland. Forced into isolation with her mother after her father’s abduction by the Gestapo, Finder’s new life was riddled with prejudice and violence. Along with her mother, she was eventually sent to work in the factory of Oskar Schindler.

Schindler was one of the first men to join the Nazi party. He operated a factory that manufactured enamel kitchenware and ammunition to fuel the German war efforts.

Despite his affiliation with the Nazi party, Schindler actively sought to protect Jews as violence and aggression against them continued to expand. He did so by employing them in his factories which provided them with safe and humane working and living conditions.

Finder opened her speech by connecting her experiences of living through the Holocaust and working in Schindler’s factory to the lives of the students in her audience. 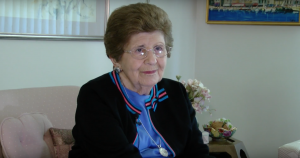 She emphasized that Oskar Schindler’s decision to stand up against hate and take action to protect his Jewish employees ultimately saved her life. Finder encouraged each person in the crowd to fight for their beliefs and to be courageous.

She reiterated several times to the audience, “You’re old enough to vote, it’s up to you, I look at you, and I see the future.”

Further into her talk, Finder elaborated on the details of one of the most impactful interactions she had with Schindler. As a young girl working in the ammunition section of Schindler’s factory, she was assigned to work with a broken machine.

A guard noticed the malfunctioning machine and let his temper out on young Finder, berating her for damaging the machine, accusing her of sabotage, and threatening to have her killed. Finder recalled watching Oskar Schindler walk across the glass bridge that separated the ammunition side of the factory from the kitchenware production side.

Coming to her rescue, Schindler questioned the guard’s logic, “How could this little girl break this big machine?” he said, thereby saving her from accusations of sabotage and the fatal punishments that would follow.

Following the altercation, Schindler would walk by Finder’s machine and regularly pat her gently on the head. To Finder this meant that “he [Schindler] saw us as humans.” She also said that the efforts he took to protect her life made him “a hero."

Ultimately, Finder guided her talk towards the importance of not forgetting the past.

She took several minutes to express her gratitude to Steven Spielberg, the critically acclaimed director who led the film project Schindler’s List. Spielberg’s decision to make a film depicting the role of Oskar Schindler and his factory in the Holocaust not only brought to light the strife of the Jewish people but the value of courage and upstanding actions in times of need.

Rena Ferber Finder not only had an impactful and compelling story to tell, but she offered an inspirational call to action. She urged Boston College students to act, practice self-awareness, and to seek to be men and women for others by modeling Oskar Schindler’s bravery, and kindness.

Relentless advocate for all varieties of chocolate, women's rights, obscene emoji use, and Christmas music year round.