In the Red Bandana Game, BC knocked off No. 25 Miami 27-14 to become bowl eligible for the third consecutive season. Putting forth an inspiring, emotional performance on the field that mirrored the atmosphere around the annual night, the Eagles once again placed themselves in the national conversation.

After receiving a couple votes in the most recent AP poll a week ago, this strong victory over Miami has Steve Addazio’s squad back on the rise. Sitting at 6-2 overall and 3-1 in ACC play, the Eagles are contenders in the Atlantic division of the conference, where BC will be at least tied for the second spot upon the conclusion of Saturday’s games. After the loss, the Hurricanes fell to 5-3 on the season and 2-2 in ACC games.

While BC undoubtedly left a few chances on the table, the all-around effort was impressive. The Eagles never trailed in the contest and seemed to have Miami on its heels from the initial kickoff. Deferring to receive the ball first in the second half, BC yielded one first down on the opening drive before stuffing consecutive Travis Homer rushes and allowing a short Malik Rosier completion to the sideline.

Offensively, the Eagles needed to keep their foot on the pedal throughout the entire contest, and Scott Loeffer’s game plan did not disappoint. Infusing a little trickery into the playbook, BC marched down the field on their first drive highlighted by a Jeff Smith toss to Anthony Brown for 27 yards to break into the Hurricanes’ red zone. A couple plays later, the same connection flipped back to their ordinary roles, as Brown found Smith in the endzone for a nine-yard touchdown.

Miami would respond with a score on the ensuing possession after a 62-yard kickoff return set the Hurricanes up in BC territory. Going 44 yards in six plays, Rosier found wideout Darrell Langham for a 13-yard touchdown to even the game at 7-7.

Yet, that would be the closest Miami would come to spoiling the traditional night. All game long, the Eagles maintained a balanced attack given the return of All-American AJ Dillon from his two game absence. Brown attempted 28 passes, the second most this year, and the lack of predictability kept Miami’s top-ranked defense at bay. 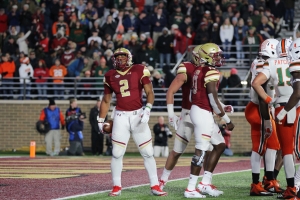 From his very first carry, the stud sophomore running back showed Alumni Stadium that he was ready to explode. Rumbling down the sideline, Dillon took his first handoff 25 yards that laid the foundation for the Eagles’ first score. Reflecting on his first touch after the game, Dillon Said, “I was thinking about the ankle on the first run, so it was definitely a great confidence booster. I was happy to be out there.”

In the end, Dillon finished with 157 yards on 32 carries, punching in the the final touchdown of the game in the third quarter that sealed the Hurricanes fate. After nursing an ankle injury the past few weeks, Dillon looked like his classic self, powering his way to an average of 4.7 yards per carry.

Commenting on his star running back’s performance, Addazio said, “I really didn't know what to expect” coming into the game.  Yet, “he far exceeded our expectations today. Certainly gave us a great boost and catalyst to our team.”

By the end of the first quarter, the Eagles had regained the lead for good at 14-7. A short Anthony Brown scamper into the end zone for five yards topped off a decisive drive that took just over three minutes to complete. 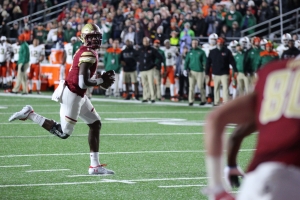 Yet, the following possession chewed a much significant portion off the clock, as BC kept the ball on the ground for 12 rushing plays in all. Reaching the Miami four yard line, the Hurricane defense stood tall in the red zone to thwart the BC rushing barrage. A short Colton Lichtenburg field goal capped off the drive, and the Eagles seemed primed to beat Miami for just the sixth time in program history.

Heading into the half, BC held a three point advantage at 17-14 after Miami’s Deejay Dallas found pay dirt from 10 yards out with a little under five minutes to play in the second quarter.

The next possession after the half proved fruitless for BC, but a circus-like interception that senior defensive back Hamp Cheevers snatched out of the air on Miami’s following drive placed the Eagles at the Miami 37 ready to add to their lead. The interception increased Cheever’s national-leading total to five, and an eventual Lichtenburg field goal pushed the lead to 20-14.

Another Rosier interception this time followed by the aforementioned Dillon rushing touchdown from 14 yards out at the 6:26 mark in the third was the final score of the game. As time ticked off the clock, the BC defense locked down the Hurricanes’ offensive attack, and the Eagles held Miami to only 49 total yards and two first downs in the fourth quarter.

After Brown took the final kneel down, the students rushed the field for the second Red Bandana game in a row.  The 27-14 victory is a significant win in the Steve Addazio era, as this is the best start in the coach’s tenure on the Heights. Further, the offensive firepower that totaled 223 yards on the ground and 210 yards through the air after Brown went 15-28 on 152 yards, recording one touchdown and one interception, shows that when healthy this offense can be a force.

This season, BC is now 6-0 when tallying at least 400 total yards. Noting the attacking prowess, Addazio believed that this was the best game all year for the offensive unit. When asked directly, the sixth year head coach said, “that's the number one defense in America right now, so probably I'd say yes.”

The Eagles will look to extend their winning streak to three games next weekend against Virginia Tech in Blacksburg. The Hokies currently sit at 4-3 overall and 3-1 in ACC play after losing to Georgia Tech on Thursday night. If BC can pull off the victory, the Eagles will most definitely find themselves back in the top-25 rankings.