The Boston College Men’s Hockey team suffered another tough loss on Thursday night, losing 7-0 to No. 2 St. Cloud State. BC now drops to 0-4-0, their worst start to begin the season in the Jerry York Era.

The Huskies took the puck drop and would exercise their dominance right from the start. Despite good puck possession by BC to begin the period, SCSU freshman Sam Hentges struck first for the Huskies. Hentges corralled the puck off the boards and rifled it past the left shoulder of BC goaltender Joseph Woll for the first goal of the game. 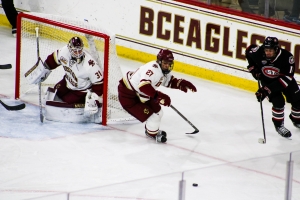 BC’s first power play came off a SCSU hooking penalty, but the Eagles couldn’t capitalize on the man advantage. BC would go 0-4 on power plays for the game. St. Cloud State showed why they are the second ranked penalty-killing unit in the country so far this year.

Huskies’ defensemen Luke Jaycox tacked on one more goal with a sharp wrister from the left faceoff circle to close the first period. Despite being down by two goals, the Eagles avoided being outplayed in the first period. They had a number of offensive chances but were unable to convert on any of them against St. Cloud State’s tenacious defense.

“I thought in the first period we were right there,” said BC Head Coach Jerry York. “We played with them up and down the ice.”

After one period of play, the Eagles led in shots, nine to seven, and also led the period with 11 face-off wins. The Eagles came into the second period looking to spark their offense and take advantage of the scoring opportunities.

Instead, they were met with a faster and more physical SCSU team. Halfway through the second, Jacob Poehling scored on an easy rebound off a misplay by the BC defense. Throughout the game, the Eagles could not clean up their play in front of the net, putting pressure on their goaltenders in tight situations.

After Sam Hentges collected his second goal of the night to put the Huskies up 4-0, York made the decision to pull Woll and put junior goaltender Ryan Edquist between the pipes. Thought the Eagles have only played four games, Woll now has a 3.72 GAA and a 0.867 SV%. Last year, he posted a superb 1.80 GAA and a .910 SV%. 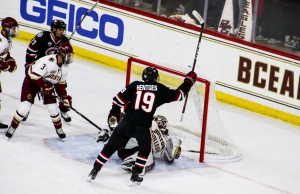 SCSU freshman Nolan Walker would add another goal just 37 seconds later to cap off a dismal second period for the Eagles at a score of 5-0. BC still led in shots at 23 to 20 despite being outplayed throughout the whole period.

In the third period, the Huskies continued with more of the same. Hentges and Walker both added goals to make the game even more of a blowout with the score at 7-0. That score would stay the same through the end of the game. The Huskies skated away with a decisive victory, while the Eagles were left to head back to the drawing board to fix their early season woes.

The SCSU freshmen duo of Hentges and Walker dominated the whole game, as Hentges tallied a hat trick with his third period goal and Walker pushed his season point total up to six with two goals.

Led by sophomore goaltender David Hrenak (1.00 GAA and .968 SV%), the Huskies are tied for third in the country in goals allowed and have already notched two shutouts on the year. On offense, they have scored on a ridiculous 16% of their shots, which ranks third in the NCAA.

So far, the Eagles have scored just five goals in their first four games. All five of those goals were scored in one game, a 7-5 loss to Wisconsin.

“That’s something we’ve addressed and worked at, we’ve just got to keep trying to get better in the offensive zone,” said York about the team’s third shutout in four games. “We’ve got to address both issues: giving up a lot of goals and lack of scoring goals.”

The Eagles will seek their first win of the regular season against Merrimack in North Andover next Friday as they open play in the Hockey East Conference.