News, Off Campus
by Lucas Coleman

On Oct. 28, Brazilian voters elected right-wing candidate Jair Bolsonaro as their next president. While his campaign resonated with voters, claiming 55% of the final vote, his upcoming accession to the Brazilian presidency has drawn much attention and concern from observers both within the country and internationally.

Boston College political science professor Jennie Purnell, a specialist in Latin American affairs, highlighted Bolsonaro's hateful rhetoric and apparent disregard for human rights as reasons his administration should be viewed with apprehension. Although he has offered up only vague policy proposals, often contradicting himself, the broad themes of Bolsonaro’s campaign are an endless series of red flags.

Among Bolsonaro’s most alarming remarks are his stated support for Brazil’s former military regime, his advocacy for torture, his lack of respect for women’s rights, and his hateful stance toward Brazil’s LGBT community, which faces some of the highest rates of violence in the world despite the country’s progressive laws on LGBT rights.

Without providing any solutions, Bolsonaro was able to gain support by drawing attention to the numerous problems that Brazil faces and channeling the anger of voters. The two most frequent targets of Mr. Bolsonaro are the rampant crime and corruption plaguing the country.

Instead of trying to solve the underlying issues that contribute to the epidemic of violent crime, Bolsonaro has only proposed to militarize the police and encouraged the use of deadly force, proclaiming that the only “good criminal is a dead criminal”. Rather than making the country safer, this only serves to exacerbate the violence that Brazilians see and make life far more dangerous for young black men in Brazil, who are already disproportionately targeted by the country’s police.

Beyond this, Bolsonaro’s election poses a significant threat to Brazil’s vast rainforests and the indigenous populations that live there. Bolsonaro has already attacked the laws Brazil has passed to protect the Amazon’s resources and people, seeing them as obstacles to economic development. Instead of recognizing Amazonian people’s right to their native lands, which is enshrined within the country’s constitution, Bolsonaro seeks to exploit their land for agriculture and mining.

When asked if Bolsonaro’s election could be connected to the wave of right wing candidates competing in and sometimes winning elections across Europe, Professor Purnell drew a distinction between these events, and instead portrayed his election as more in line with current trends in Latin America than with European politics. 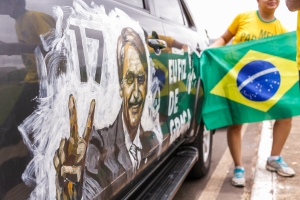 Whereas right wing movements in Europe gain their support from “popular opposition to immigration and refugee flows,” Bolsonaro’s success derives from the voters’ “rejection of incumbent parties,” according to Professor Purnell.

While anti-establishment uproar contributed to Bolsonaro’s victory over a left-leaning government in Brazil, the same has not been the case in every Latin American country. In Mexico, for example, similar backlash brought left-wing populist Andrés Manuel López Obrador to the presidency over the incumbent center-right Institutional Revolutionary Party.

In particular, Brazilian politics has been mired in a myriad of corruption scandals, namely those of previous presidents Luiz Ináncio Lula da Silva and Dilma Rousseff.  Bolsonaro, despite his deficiencies when it comes to human rights, has avoided allegations of corruption and was able to present himself as the clean candidate who would fix Brazilian politics and purge it of malfeasance.

Rather than winning voters over with clearly elucidated policies, Bolsonaro was able to sway voters with his outspoken opposition to the political establishment, of whom Brazilian voters have had more than enough.