Perched upon the throne that is his piano stool, Elton John electrified the crowd at TD Garden on Tuesday night as part of his Farewell Yellow Brick Road tour, playing an astounding 24-song set filled with classics and rare gems that left the crowd yearning for more. 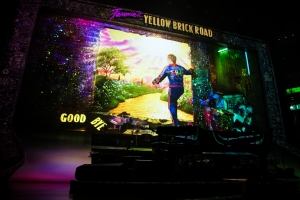 Fans of all ages stood in the lines to get into the show, with many sharing expressions of nostalgia about the legendary music icon. One woman, joking about modern security measures, said she “didn’t have to do this back in 1972”; another man reminisced with his friend about “listening to Don’t Shoot Me I’m Only the Piano Player in his basement back in the day.”

As the arena started to fill up, vibrant feather boas, dazzling sunglasses, and clothing adorned with sparkles could be seen sprinkled throughout the crowd—a tribute to the flamboyant attire often sported by John. The grand stage set also spoke to John’s exuberance. A frame loaded with depictions of John’s career (e.g. The Lion King, Billy Elliot, and platform heels) outlined a giant screen featuring John walking through a wall down a yellow brick road toward a colorful, bright path.

The crowd rose to their feet as the house lights went down, providing a rousing entrance as John and the other five members of the band took the stage. When the instantly-recognizable piano riff to “Bennie and the Jets” began, just about every mouth in the audience could be seen getting ready to rock out in a style reminiscent of Katherine Heigl and James Marsden in 27 Dresses. 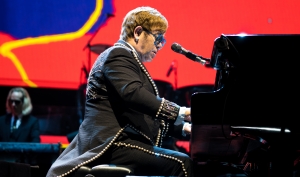 After following his opener with “All the Girls Love Alice”, a classic off of Goodbye Yellow Brick Road, John addressed the crowd, explaining that he was happy to be back in Boston after performing there almost a month ago. He went on to share that the creation of the setlist did not come easy, considering he has over 50 Top 40 hits. The songs he finally chose are “the ones that have meant the most to [him] when [he] performed,” giving insight into the intimate meaning this tour has for him.

John dedicated a powerful rendition of “Border Song” to Aretha Franklin, who had covered the song after its release, while a montage in the background displayed images of young people along with prominent civil rights figures, such as Rosa Parks and Martin Luther King, Jr. He continued on with “Tiny Dancer”, another musically powerful song that brought TD Garden to sing together in unison.

Percussionist and longtime John accomplice Ray Cooper had the chance to flaunt his skills on “Indian Sunset”, gracefully maneuvering the intricacies of a song aimed at John die-hards. He brought it back to the classics with “Rocket Man (I Think It’s Going To Be A Long Time)” and “Take Me to the Pilot”, before touching on another personal note with “Someone Saved My Life Tonight”.

John wrote the song at a time in his life when he was set to marry a woman, even though he knew he was gay. The video played during the song depicted John trapped in a pinball machine, aggressively being tossed around by other elements in the machine—a portrayal of the different parts of his life weighing on his mind at the time. Throughout the emotional piece, one could look into the crowd and sense how thoroughly the song resonates with people from all walks of life.

A semi-intermission filled with eerie organ noises and Phantom of the Opera-esque smoke and lighting led into “Funeral for a Friend/Love Lies Bleeding”, with John also changing into a pink suit with a sparkling collar. While the rest of band was dressed in black and white throughout, John stood out, as per usual, in his eclectic costumes. 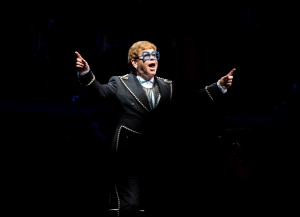 Prior to a deep performance of “Believe”, John discussed an epiphany he had in 1990. He hated himself, as he had become an addict and was miserable with his life. However, he turned his shame into hope as he got sober and clean, allowing him to start the Elton John AIDS Foundation. The organization has raised $430 million since its inception, exceeding the vision John originally had for the foundation.

As this song played about the “extraordinary healing power in compassion and love,” to use John’s words, a perfectly fitting scenario occurred in my section: a man was taking pictures for a World War II veteran, who could be seen beaming with each flash of the camera. Others in the section thanked the veteran for his service and patted the quasi-photographer on the back—a harmonious moment for a harmonious song.

Following “Daniel” and “Sad Songs (Say So Much)”, John took time to describe how touring since 1969 has been the most miraculous journey, having not imagined what would happen in 50 years when he got the band together. “I will miss you,” said John, humbly expressing gratitude for the fans. “But I have enough memories and applause for a million lifetimes, and I want to thank you.”

Cell phone lights filled the arena as John belted “Don’t Let The Sun Go Down On Me”. He then closed out the main portion of the show with some of his most recognizable songs: “The Bitch Is Back”, “I’m Still Standing”, “Crocodile Rock”, and “Saturday Night’s Alright (For Fighting)”. The energy in TD Garden was unmatched at this point, and the audience knew John must have a few more songs in him. 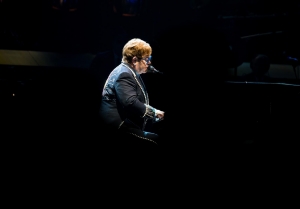 John came back out for the encore in a classic blue robe and red heart glasses, giving the audience its money’s worth with “Your Song” and an emotional “Goodbye Yellow Brick Road”. A somber montage of bits of John’s career played during the last song, bringing some in the arena to tears. As the final song played out, people throughout the crowd held onto those they had come with to bid the music icon a final departure. Rocket Man exited the stage in a small metal enclosure that brought him back into a deep blue screen emulating the stars in the sky, as he said goodbye to Boston, one last time.

Living my best life when the Yankees win, snuggling my dog, or
reminding people I'm from New York. Wouldn't be the person I am today
without the support of Goldfish crackers and red grapes