The Boston College men’s basketball team beat St. Francis Brooklyn 74-69 in a tight contest on Sunday afternoon. St. Francis stayed in the game until the very end, but the Eagles were able to come away with the win.

F0r the majority of the first half St. Francis held the lead as BC’s offense struggled to get going. The team wasn't finishing open shots and got into foul trouble early—they had 5 team fouls in the first eight minutes of play. Early on, miscommunication led to a lot of turnovers and the defense couldn't stop St. Francis guards Jalen Jordan and Chauncey Hawkins who willed their way to the basket and shot effectively from the three-point line.

BC guard Ky Bowman got off to a slow start, missing his first four shots. However, at the end of the first, Bowman pieced together BC’s last eight points, tying the game at 33 going into halftime. 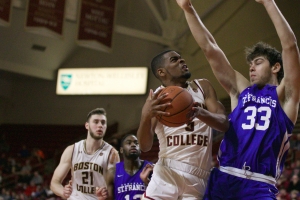 The Eagles started the second half strong, immediately forcing a turnover and going on a 5-0 run. Despite the Terriers calling a timeout to regroup just one minute into the second half, BC forced yet another turnover directly afterward.

At the 13 minute mark in the second half, Bowman clearly wanted to dominate the game. In a defensive mismatch, he posted up the defender and snuck around him with an aggressive drive to the basket. Although he missed, he immediately got the offensive rebound and put the ball right back up for a score. He led all scorers on the day with 26 points.

Even with their weak start in the second half, St. Francis kept finding ways to stay in the game. Jordan and Hawkins continued making three-pointers and capitalized on BC’s defensive breakdowns. Jordan and Hawkins ended the game with 22 and 17 points, respectively.

BC guard Jordan Chatman had a good game, making nine of 11 free-throws and scoring 19 points. As the game got down to the wire, Chatman and guard Wynston Tabbs both hit clutch free-throws to secure BC’s lead. 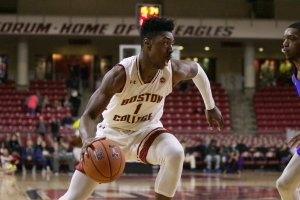 The Eagles’ defense also improved at the end of the game, forcing the Terriers into a number of turnovers. In the final three minutes of play alone, BC forced three major turnovers to keep momentum in their favor.

Overall, BC struggled to play as dominantly as they could have. The team shot 67% from the free-throw line and 25% from the arc. They had 13 total turnovers and committed 19 personal fouls. Bowman fouled out with 19 seconds left to play.

Although BC has started the season 2-0, both games have been characterized by slow starts on offense. If the Eagles hope to stay competitive in the ACC, and possibly get a bid to the dance, they’re going to have to build some more chemistry, cut down on turnovers, and start stronger on offense.

The BC men’s basketball team plays on Wednesday, Nov. 14 at 7 p.m. in Conte Forum against Indiana University - Purdue University Indianapolis.