Boston College’s three-game win streak came to an end on Saturday night with a 2-2 tie in Conte Forum against the University of New Hampshire Wildcats. The Eagles were down 2-0 going into the third period but managed to score two goals in regulation to send the game to overtime.
Both sides came out of the gates with a sluggish start. For the better part of the first period, neither team seemed to be able to gain any offensive traction, with most possessions ending with a low-percentage shot or a poor pass.


That all changed halfway through the period. After BC goalie Joe Woll dove to his left to deflect a shot from UNH’s Max Gildon, Jackson Pierson recovered the rebound and had a clear shot to score his first goal of the season, putting the Wildcats up 1-0. 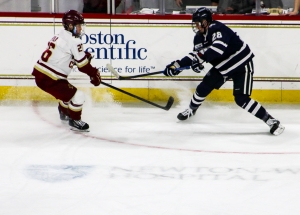 UNH had a major confidence boost after this initial strike; they played much more efficiently on the offensive end while also asserting themselves physically on the defensive end. Although they did not get off nearly as many shots as BC, they were clearly doing a much better job of finding opportunities, as they had only two fewer shots on goal with seven fewer attempts.


The second period was more of the same: UNH extended their lead to 2-0 when Nazarian Ara chipped the puck up past Joe Woll into the top right corner of the goal.


Going into the third period, BC Head Coach Jerry York lit a fire under his team, and they came out hungry to get back into it. In the face of a 2-0 deficit at home, the Eagles scored early in the period as Jack McBain scored the first goal of his collegiate career to cut UNH’s lead in half.

BC built off of this momentum to tie up the game with seven minutes left when Logan Hutsko passed it from behind the net to David Cotton, who launched a one-timer into the top shelf.
The Eagles seemed to have all the momentum going into overtime after dominating the final frame of regulation. They finally had begun to make the passes they needed to which created proper spacing on the ice opportunities for high-quality shots. 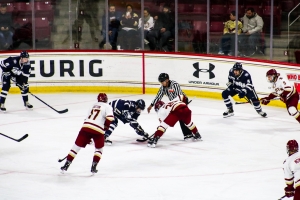 However, their improvement in play proved to come too little, too late, as they were unable to score a go-ahead goal in overtime. After an extra five minutes of play, both teams walked away dissatisfied—UNH after blowing their lead, and BC after failing to capitalize on their momentum and take home a victory.

BC will look to pick up a win at home against Bentley before returning to conference play with a two-game series against Boston University. BC currently sits in a tie for third in the Hockey East standings with BU, bringing added significance to the already heated rivalry.