Features, On Campus
by Caroline Blessing

Good news is in store for those at Boston College whose anxieties about course registration are looming. Students can now use EagleVision to browse through all available courses at BC, view course ratings and reviews, and receive notifications whenever a class opens. The app allows users to save courses to a wishlist and easily access their corresponding index numbers for UIS registration time.

According to a Facebook promotion post from co-creator Estevan Feliz, MCAS '21 and Forbes Under 30 Scholar, “if you haven’t used EagleVision, it’s the new EagleScribe, but better!” Just within the first week of its release, EagleVision has curated 1,000 active users, more than 2,00 course-notification subscriptions, and has sent out over 800 course-open notifications. 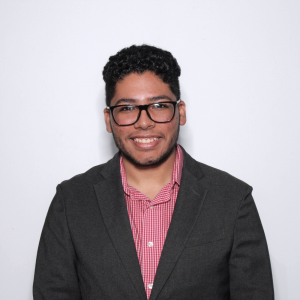 But for Feliz, this recent success is the culmination of several years of hard work in the making. “It all started when I was in elementary school,” he says, “[During this time] I found an interest in the potential that computers and technology had to make our lives easier and solve problems.” Under the YouTube screen name Techguy1002, a young Estevan created video content to teach viewers technological skills that would improve their daily lives. His first coding projects began in middle school, and further developed early in high school. In the summer before his sophomore year, while preparing for his driver’s license test, Feliz recognized the inefficiency of manually logging supervised driving hours.

“When I went to the DMV, I was given a booklet and asked to fill it out, but I wondered if there was an application available for drivers to keep track of all their hours on their phones,” Feliz explains, “and to my surprise there weren’t any.” Thus, he took to the Internet to learn how to create a mobile application program, a full prototype that would be published on both Google Play and the Apple App Store called DrivePad Teen Driving Log.

The study of technology and software has not only fundamentally changed life on campus, but it has shaped the global community at large. As a computer science major, Feliz credits much of his inspiration to BC’s constructive learning environment, and is particularly indebted to Professors Gallaugher and Montazerhodjat. Hoping to enact greater change, Feliz started a company under which his applications are published. Feliz Studios holds this motto: “Bringing change to our society, one app at a time.” More of Feliz’s projects can be found on his personal website. In the future, the CEO plans on expanding his company and eventually hiring others whose views and aspirations align with his.

EagleVision co-creator Haochen Pan, MCAS ‘21, clearly relates to this vision. As Feliz’s freshman year floormate, Pan approached him in December of 2017, expressing his grievances over course registration and proposing an idea to tackle the issue. 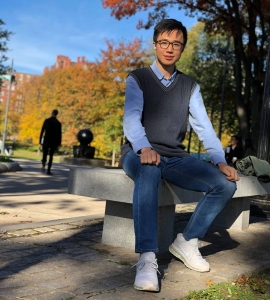 The initial plan for the project was to create an application that would predict the chances of gaining entry into a particular course, based on class year, major, and registration time. However, the two realized there was more potential with such a tool. Consequently, they embarked on the ambitious journey to build a new browsing system that included: a clean and well organized layout for class details; the ability to view ratings and reviews for a course left by others students who had previously taken the course; subscription notifications for an unlimited number of courses (EagleScribe capped subscriptions at only three courses); a wishlist where students can easily see index numbers for their top courses on registration day; and a course search tool by name, professor, and code. Feliz and Pan committed to consolidating all of these features into a single app in March of 2018.

EagleVision has been in full development since early this year, having seen many changes since the spring. “No code I wrote then survived on our machine today,” Pan says, “I tried to incorporate different open-source packages to make it readable, stable, and faster. My internship as a web crawler engineer this summer really gave me a taste of ‘industrial standards.’” According to Pan, his initial idea for a registration-predictability feature will be included in future updates.

Likewise, Feliz utilized his intern experience to enhance the app’s features. “After working at TripAdvisor, I learned a lot about building applications in a more corporate or commercial setting, and was able to apply the skills learned there in our project,” he explains.

The development period was long, but Feliz and Pan supported each other throughout each step in the process. Although the app experienced a few issues over the Halloween weekend (an inexplicable white-screen glitch that the co-creators comically named “the ghost”), the two learned from the short setback and relaunched EagleVision the following week. Since then, the app has spread quickly, with many students expressing gratitude for the app's help in evading registration crises. “Thanks to Estevan, we have quite a good recognition among students,” Pan says.

As mentioned previously, the app’s popularity on campus subjects it to much user traffic. “Thanks to Haochen, we have a very robust and reliable backend that’s been able to handle our large influx in users with ease,” Feliz continues. Although it may seem as though EagleVision is complete, rest assured that this is only Phase One. Feliz and Pan are working on many exciting features that will improve the app. Feliz encourages everyone to stay tuned, as they will be announcing more information and updates over the course of the next few months.

Ask me about my dogs and the podcasts I'm listening to.