Home›Opinions›Beyond Campus›Poland, Trump, and a Friendship Built on Far-Right Fervor

Poland, Trump, and a Friendship Built on Far-Right Fervor

Beyond Campus, Opinions
by Julia Swiatek

November 11 marked the centenary of Poland’s independence, after disappearing from the map of the world for 123 years. What should be a day of celebration and appreciation was tainted by the hateful messages of anti-Semitic, xenophobic, and nationalistic demonstrators. Though the vast majority of the 200,000 people who gathered in the nation's capital of Warsaw were regular citizens celebrating their nation’s freedom, amidst the crowd there were flashes of ONR or Forza Nuova banners. ONR, Obóz Narodowo Radykalny, is a fascist, neo-nazi political group in Poland, and Forza Nuova is Italy’s far-right equivalent.

Poland’s bolstering of xenophobic and nationalistic sentiments mirrors a phenomenon that arose in the U.S. after the election of Donald Trump. America saw shocking white supremacist demonstrations, and the FBI reported a 17% increase in hate crimes from 2016 to 2017. The internet—particularly Facebook—became a cesspool of conspiracy theories and propaganda from extremist groups. One may argue that a country’s leader is not responsible for the hateful opinions and actions of others. However, I believe that Donald Trump and the ruling political party of Poland have both heavily contributed to the increasingly radical political climates of their nations. The most disturbing part? How much praise Poland’s leaders and Donald Trump regularly heap onto each other. 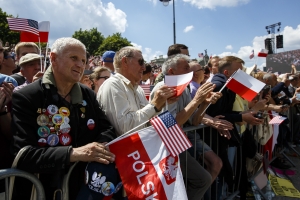 PiS, Poland’s Law and Justice Party, came into power in 2015 with the election of President Andrzej Duda. Since then, the country has ideologically shifted right and moved away from democracy. One of PiS’s most highly reported controversies occurred when the party disregarded Poland’s constitution and removed dissenting justices from the Supreme Court while appointing heavily biased justices to the Constitutional Court. The far-right party successfully seized control over Poland’s courts, undermining the integrity of justice in the nation. In response, the European Union attempted to strip Poland of its voting rights, but to no avail.

When the EU eventually decided to sue Warsaw over another set of controversial judicial laws, Trump backed Poland with an interestingly worded statement. Only hours later he declared, “In Poland, a great people are standing up for their independence, their security, and their sovereignty.” The sovereignty he seems to be referring to is from the European Union, raising questions why a U.S. President would be in favor of destabilizing the EU?

Disregard for checks and balances isn’t the only way Poland has been pushing the European union to its tipping point; leaders have also been suppressing the freedom of press. PiS seized control of the only public broadcasting station in the country, TVP, and largely dictates how events are portrayed or whether they are covered at all. The station regularly praises the party’s achievements at home and abroad; criticism of the party’s actions is a foreign concept. When TVN, another Polish news source, aired footage of protesters supporting free speech, they were fined $415,000 by PiS for coverage of an event they had essentially banned.

Despite these blatant moves towards an autocracy by Poland— undermining justice and the press—Trump continues to be a vocal supporter of the nation and its leadership. His praise is warmly received by PiS which panders to his arrogance and showers him with admiration in return. President Duda event went as far as to suggest that a U.S. military base in Poland can be named “Fort Trump.” 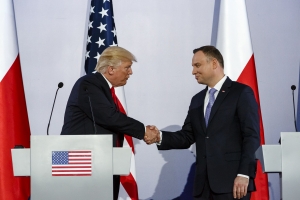 What’s intriguing is why these two nations seem to be so fond of each other. While alienating other European allies, Trump has remained friendly with the nation threatening the very values of the EU. An article by the far-right news website, Breitbart, even declared “Bond Between America and Poland ‘Stronger than Ever’ Thanks to Trump, say Ambassadors.” For one thing, there’s a clear link between what Poland’s government has achieved in terms of gaining control over the nation and what Trump wants out of his presidency. Trump’s tirade against the Mueller investigation—most recently, by appointing Matthew Whitaker—is an attempt to control the decisions of justice, while PiS successfully manipulates Poland’s courts. Trump also continuously instills mistrust of the press in the American people in an attempt to discredit his critics. Meanwhile, Poland’s PiS punished its critics by a hefty fine.

In a way, Poland is a cautionary tale for what the U.S. could become if Trump had his way, but the U.S. and Poland are bonded by more than a lust for autocracy. The leaders of PiS and the U.S. President both unabashedly express xenophobic, anti-immigration sentiments. Trump’s attacks on Muslims, Mexicans, and other minorities are too numerous to even count; meanwhile Poland, a country comprising of nearly 98% white ethnic Poles, is unsurprisingly hostile to hopeful non-white immigrants as well. The rhetoric used by Trump and Duda evokes fear in those who trust them. They speak of terrible consequences of immigration: drug cartels, rape, terrorism, crime, unemployment. They demonize those who seek refuge and label them as criminals. Their rhetoric has consequences, and the byproduct is the growing presence of groups like ONR or white supremacist demonstrators. Those who hate are emboldened to hate louder and prouder.