Boston College men’s hockey took both games in a home-and-home series with UConn this Thursday and Friday. The Eagles travelled to Connecticut on Thursday night and came away with a 4-0 victory behind a Julius Mattila hat trick. On Friday night, BC kept their momentum and came away with a narrow 3-2 win over the Huskies in Conte Forum.

On Thursday, BC goaltender Joseph Woll stopped all 30 UConn shots to come away with his second straight shutout. Woll’s impressive game included a number of acrobatic saves in the second period.

The Eagles rode the momentum provided by their goalie to take control of the game. They converted on both of their power play opportunities, while UConn was 0-2 with the man advantage. Mattila completed his hat trick with a short-handed empty net goal in the third period.

Mattila had a career night, posting three goals and an assist. He now has six goals on the season, the second most on the team. David Cotton leads the Eagles with 11 goals on the year.

BC’s other goal came from Logan Hutsko on the power play at the 7:24 mark in the second period. Casey Fitzgerald and David Cotton both had two assists on the night. 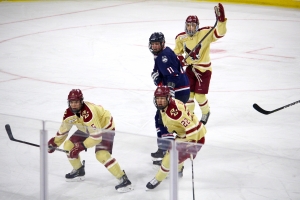 Coming off a 0-0 tie with Boston University in which BC was held off of the scoreboard through three periods and overtime, the Eagles’ offense came out to play on Thursday. They fired off 27 shots on goal and rode strong special teams play to a convincing victory on the road.

The two teams traveled back to Boston for another matchup on Friday night, one that closed out the first half of the season. The Eagles came away with a 3-2 victory on goals from David Cotton, Jack McBain, and Oliver Wahlstrom.

BC converted another power play opportunity and finished the series against UConn 3-5 on man advantage situations. Goaltender Joseph Woll led the way for the Eagles once again with strong play in between the pipes, tallying 28 saves.

Junior David Cotton has been a scoring machine for the Eagles all season—but another big part of Friday night’s game was the production from BC’s younger players. McBain and Wahlstrom, both freshmen, netted goals in the second period to put the Eagles ahead for good. A highly touted rookie, Wahlstrom now has four goals on the season.

The Eagles played well on both sides of the puck for the entire series and picked up two important wins. UConn now sits at just 5-11-1 on the year. BC has to continue to win games against teams that they should beat if they want to continue to move their way back up towards the top of the Hockey East standings. 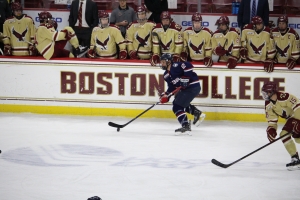 Now sitting at .500 at the midpoint of the season, the Eagles will have a few weeks break before moving on to the rest of their schedule. They will travel to Notre Dame for a New Year’s Eve matchup against the Irish on December 31. They’ll look to carry their recent momentum through the holiday season and continue to pick up wins in the new year.

The Eagles’ first home game of the new year will be Friday, Jan. 11 against Providence in Conte Forum.

A firm handshake, eye contact, and a quick nod. It's just what I do.