Home›Features›After Two Years of Trump, Women's March is Tired—but Must Go On

After Two Years of Trump, Women's March is Tired—but Must Go On

Features, Outside of BC
by Ellen Gerst

In a Charles St. cafe, across from the Public Garden, protesters gather around cups of coffee and bowls of soup. Their carefully made signs, emblazoned with slogans and catchphrases of varying degrees of originality, lean up against table legs. Pussy hats lay next to sugar packets.

Outside, in the bitter January cold, thousands of tightly bundled people are gathered around the main stage of the 2019 Boston Women’s March. The turnout is what you’d expect: college students, mothers and children, and groups of older women who have clearly been participating in marches and protests like this one for longer than most of the crowd has been alive. 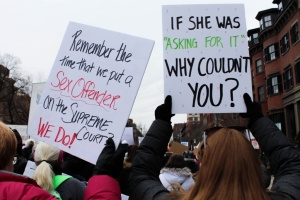 A sexual assault survivor tells her story onstage. At the end of her speech, she leads the crowd in a familiar call-and-response including “No justice, no peace.” During the march, someone starts a round of “We Shall Overcome.”

I was here two years ago, too—in January of 2017, the day after Trump took office. That day, the Common was packed to bursting, overflowing into the streets and the Garden. People had traveled from New Hampshire, Connecticut, and farther to attend the Boston march, while hundreds of other cities also pulled record-breaking crowds.

In 2017, the mood was angry, bitter. Two years later, the mood is more subdued as people leave and join the crowd at will. The speakers rotate quickly on stage: slam poetry, student activists, local organizers. The cafe on Charles St. has a line out the door.

As expected, many things have changed since 2017. The references are updated (see: Handmaid’s Tale costumes on stage), the signs are more inventive, and the Mueller investigation has taken the place of the “grab her by the pussy” clip as some of the most popular sign material. But most noticeably, the march focused on intersectionality more than ever; chants of “Black Lives Matter” and “Immigrants are welcome here” rose out from the crowd between speakers. 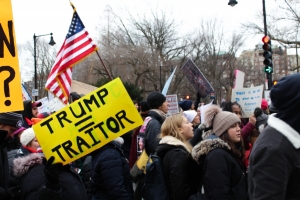 The country seems to be getting used to this new regime we live under. In 2017, Trump in the Oval Office was an unusual novelty, inciting unequal parts fear and curiosity about what was about to happen. Now, it’s happened, and it keeps on happening. Americans have grown adjusted to a reality in which you continuously learn about your president's illicit actions on a weekly basis. That was the mentality hanging over the crowd at the 2019 march. Two years of resistance is tiring, but tired isn’t an option when two more years still loom ahead.

In some ways, this year’s march is more alarming than 2017’s. Exhaustion is dangerously close to burnout, and, at this point, burnout is fatal. Take comfort in the thousands that are still turning out to Boston Common on a frigid January morning. And join them next year.