This night had all the makings for a resounding win that would push the Eagles further up the conference standings. Yet, in a rocking Conte Forum swarmed with a sea of maroon and gold (and at least a little bit of orange), the Eagles came up short.

Challenged by the infamous 2-3 Syracuse zone and NBA prospect Tyus Battle, the Boston College men’s basketball team (11-8, 2-5 ACC) could not pull off the upset against the Syracuse Orange (15-6, 6-2 ACC), losing 77-71 Wednesday night.

Off his recent three-game hot streak, Chatman was strong from the tip-off. In the first 2:52, Chatman recorded a layup, two free throws, and a three pointer to send the Eagles on a 10-2 run.

Jared Hamilton was the Eagle’s first substitution of the game. Right away, he provided a spark for Head Coach Jim Christian and co., taking a tough drive to the basket and drawing a foul. Hamilton’s intensity continued throughout this game and kept the Eagles neck and neck with the Orange down the stretch.

After the hot start by the Eagles, the Orange responded with a run of their own. Back-to-back threes by Syracuse’s Elijah Hughes and a transition layup by Battle cut a nine-point lead to just one. A monster dunk by Oshae Brissett added to a 14-0 run by the Orange to take a three-point lead against the Eagles halfway through the first half.

After a Chatman two-pointer ended the BC drought, Buddy Boeheim, the son of Syracuse Coach Jim Boeheim, took over. He answered with two straight three-point field goals and gave the Orange a four-point advantage. Marek Dolezaj and Battle hit two more threes to extend the lead to seven.

With 2:45 to play, BC fought their way back with a quick 7-0 run thanks to Ky Bowman. After scoring his tenth point in the first half, Bowman has now scored in double figures in 28 consecutive games for the Eagles, dating back to last season.

Like they had been doing all game, Syracuse answered with another three-point barrage, pushing the lead back to seven heading into the second half. The Eagles went to the locker room down 42-35, trying to find a way to slow down the Orange offense that shot an incredible 63% from the field and 50% from three.

For much of the first half, the Eagles were forced to shoot from outside the paint, heaving desperate shots at the end of shot-clocks and failing to work the ball to the inside for either Nik Popovic or Johncarlos Reyes. Syracuse induced three shot-clock violations by the Eagles, much of the time occurring when Popovic was stuck with the ball, double-teamed by Syracuse defenders in the post.

Yet, the shots were still falling for the Eagles, as they went on to shoot 50% from the field and 45.5% from three, and it became a matter of limiting open shots on defense and diversifying offensive possessions for the second half.

Heading into the final 20 minutes, Christian opted for the 2-3 zone to start the half, in an effort to cool down the Orange from the field.

Instead, it got them going even more—Battle and Hughes scored quick buckets in the paint to extend the lead to double digits, forcing Christian to call a timeout less than two minutes into the half.

If there is one way to beat the Syracuse zone, it’s with passing. Fantastic ball movement initiated by Jared Hamilton opened up Chatman on the wing for the open three; on the next possession, Chatman struck again from beyond the arc, on yet another Hamilton assist.

After a Battle three, BC started to close the deficit in an intense 2-and-a-half-minute stretch. Bowman hit an incredible three-pointer on the left wing at the end of the shot-clock, Popovic grabbed clutch rebound after clutch rebound, and Jared Hamilton blew by the defenders for a rim-rocking dunk. Conte was sent into an absolute frenzy with the Syracuse lead down to 2.

The three-time ACC player of the week and potential Wooden Award winner took over the game. He poured in 21 second-half points, en route to a 31-point outing, his second highest total of the season. He also dished six assists and grabbed four rebounds. Credit must be given to the Eagles for playing great defense on Battle, but he was hitting his shots no matter what was thrown at him.

“I think when you got a great player like that and you give him some teed up shots early in the game, you get him going,” said Christian about Battle’s second-half performance.

More threes from Battle and Boeheim and BC turnovers pushed the lead to 10 with 2:45 in the game. The Eagles continued to fight, however. After quick baskets and forced turnovers from Bowman, the Eagles brought the lead down to six with 39 seconds left.

Yet, after a couple offensive rebounds from Popovic and Chatman, the Eagles still couldn’t hit from outside. The game would end with a final of 77-71. 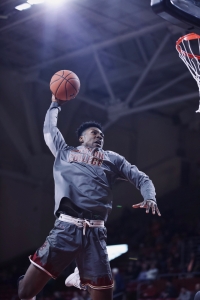 “They’re a hard team to match up with,” said Christian about the starting five for Syracuse. “They got four guys out there that can all drive it, shoot it…the best offensive Syracuse team I’ve ever seen.”

This was Syracuse's sixth ACC victory of the season as they went up 48-26 all-time against BC. They will travel to Pittsburgh on Saturday, hoping to get another win and see their name in next week’s AP Top 25 ranking.

Before the game, Coach Christian announced that guard Wynston Tabbs would not be available for the game against Syracuse with lingering discomfort in his knee.

“Other guys have got to step up ... but, it’s frustrating,” said Coach Christian about the absence of Tabbs. “He’s a guy we could’ve put in the middle of the zone because he can score and pass ... another playmaker on the court.”

Throughout the game, it was evident that the Eagles were missing a third perimeter scorer. The return of Tabbs will be crucial heading into the home stretch of the regular season for the Eagles.

Jared Hamilton had the best game of his young BC career Wednesday night. He finished with 12 points on 5-8 shooting with some momentous plays, including the monster dunk and clutch block in the second half. He played fantastic defense on whomever he was facing and forced Christian’s hand to get more playing time over Chris Herren Jr. With Tabbs still out, Hamilton could see his name in the starting five next game against Notre Dame.

The Eagles await the Notre Dame Fighting Irish (11-10, 1-7 ACC) for a Saturday afternoon, must-win ACC matchup. After losing a close one against the Fighting Irish last time they played, the Eagles will look to put out a better showing on the heels of a couple ACC victories.