BC Basketball Picks Up Much-Needed Win Against Pittsburgh

The neon green of the coaches’ ties illuminated the sidelines of Conte Forum as Boston College men’s basketball joined in Coaching for Literacy’s “Fight for Literacy Games” initiative for a second consecutive season in their Tuesday night matchup against the Pittsburgh Panthers. Following a tough loss to Syracuse on Saturday, the Eagles came back with a vengeance to end their four-game slide with a 66-57 victory over the Panthers.

Ky Bowman made his presence known on the court early on in the contest by getting the Eagles’ first points of the game after locking down Pittsburgh freshman guard Xavier Johnson in the opening minutes. However, without Nik Popovic and Wynston Tabbs, the Eagles’ second and fourth leading scorers, the Eagles struggled from the field in the opening minutes of the first half, missing six of its first seven shots. 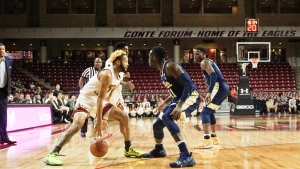 Bowman hit another three-pointer with just under eight minutes left in the first half to give the Eagles a nine-point lead, their largest of the night to that point. The Eagles continued to claw their way up on the scoreboard, with Bowman scoring in double figures for the 32nd consecutive game. At the half, the Eagles held a slim 32-27 lead.

The game continued to be a fight for dominance as the Eagles and the Panthers went back and forth for the majority of the second half.

The injury bug bit the Eagles once again in the second half, as Steffon Mitchell headed to the locker room with an eye injury and Jordan Chatman suffered a lacerated finger. Chatman attempted to return to the game, but left the court again when his wound reopened. Mitchell would return to the game with around nine minutes left in the second half. When both players left the court, Boston College’s prospects became dim, as the Eagles were without four regular starters.

The Eagles briefly trailed by three points before gaining back a two-point lead with an elbow jumper from Bowman. Boston College started to heat up from the floor with two big time knockdowns from Jared Hamilton and Chris Herren Jr.

With just minutes left in the game, the Panthers’ offense became sloppy, turning the ball over multiple times and allowing for Jared Hamilton to hit another pull-up jumper to extend the Boston College lead.

The Boston College Eagles will face off with the 10-13 Miami Hurricanes on Sunday night at Conte Forum, hoping to start a winning streak with time running out on this season.

Be sure to follow @BCGavelSports for the latest updates on Boston College athletics.

Grew up in the Arizona desert but my heart is at Fenway. When I’m not watching Patriots games, you can find me grabbing some ramen or catching up on Hawaii Five-O with friends.